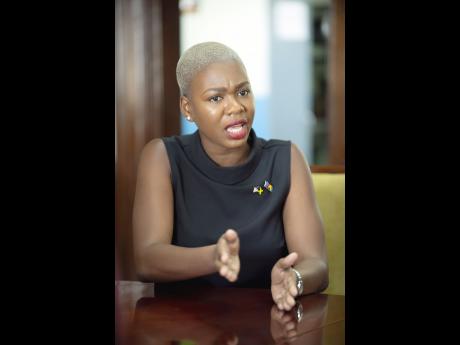 One young business owner believes that the Government can do more to foster the growth of industries that some may consider unsustainable.

Shawneil Bailey, founder and managing director of people management service company, Zarabelle Limited, said that increased assistance from the Government could help people to see that talent-management and other creative industries are feasible.

"The problem we have here in Jamaica is that a lot of people don't see the creative industry as sustainable. They come in, they leave because they don't feel like they can grow from there. If the Government was assisting us, then that would make persons want to tap into the industry," said Bailey, who is a member of the most recent cohort of the Young Leaders of the Americas Initiative (YLAI).

At a Gleaner Editors Forum held at the company's North Street offices in Kingston last Friday, the budding business leader said that some members of the private sector have also failed to make capital available to help young entrepreneurs expand their businesses.

"In Jamaica right now, I've literally been to at least five banks and they've all told me 'no'. Why? Two reasons, I'm in a risky industry - creative. Another one, I'm risky because I'm an entrepreneur. But if I wanted a car loan, I would have gotten that easily," Bailey said.

Bailey, who was based in Miami, Florida, for the YLAI programme, also pointed out that while in the United States, one thing that stood out for her was that regulations were in place for the talent-management industry.

"The regulations that they have over there allow them to dominate the market a lot, in the sense that when they have casting agencies, a lot of times they are able to defend their talents, but not by themselves. The Government is kinda behind them," Bailey explained.

She said she plans to have dialogue with the local film commission to have similar regulations put in place in Jamaica.