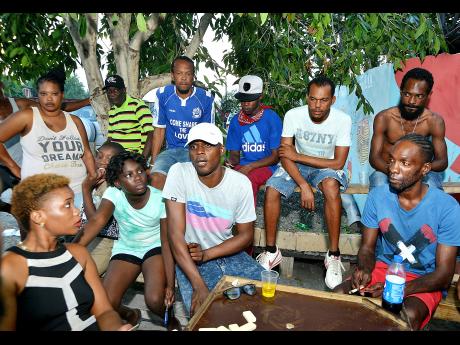 Kenyon Hemans
Kenrick Morris (centre) makes a point about the protection of children in Drewsland while his neighbours look on.

Young men in a section of Drewsland on the banks of the Sandy Gully are heaping praise on two social groups operating in their community for their help in reducing, if not eliminating, teenage pregnancy in the area.

"The reason why you don't really have this teenage pregnancy issue over here in Drewsland is because there are two youth groups run by RISE Life Management and St Patrick's Rangers, who are doing phenomenal work to keep the youths head straight," said Jason Dawson, one of the young men who took part in a recent Gleaner/RISE Life Management On The Corner with Unattached Youths forum on 'Romie's Corner' in the community.

He said that while teenage pregnancy is a common occurrence, especially among youths in inner-city communities, it is something that is actively frowned on in Drewsland.

"Trust me when I tell you that we have better things doing with our time than to be chasing the tails of these young girls. We rather give them some money for school than to put certain talk inna dem head," said Dawson.

The youth activist said that teenagers in the community are actively seeking out the youth groups as a source of inspiration and learning.

"When they come to these groups, they acquire life-skills lessons on topics such as teenage pregnancy and crime and violence, and so forth, so they get information. This is information they use to direct conduct and it's a good thing.

"It means that they will not just take part in certain activity for these setbacks to happen to them because they would have received training," Jason noted.

Another Romie Corner regular, AndrÈ, argued that the difference between Drewsland and some other communities is that young people in his community are encouraged to become positive thinkers and doers, able to keep at bay those who wish to corrupt the teenage girls.

"We have a very positive energy than negative, and since teenage pregnancy and child molestation is negative, you won't find it happening here, and if it does happen, it's one in a million," said Andre.

"Here in Drewsland, the people's energy is way more positive than it is negative, so you not going to find that round here. We guide the kids them. We don't destroy them," said AndrÈ.

Fellow resident Kenrick Morris endorsed the comments of his neighbour as he declared that it takes a community to raise a child.

"I am an adult in the community, and I'm not going to see your child do something wrong and I don't correct him or her because we have to address the socials ills that affect we as a people in our surroundings," declared Morris.

"I'm not going to be a hypocrite and say it don't happen one or two times ... we are not perfect, we could be partaking in what is happening around us, but the youths that become elders now have a positive mindset, and them also influence the kids," added Morris.