Fly Jamaica awarded half a billion dollars in legal dispute 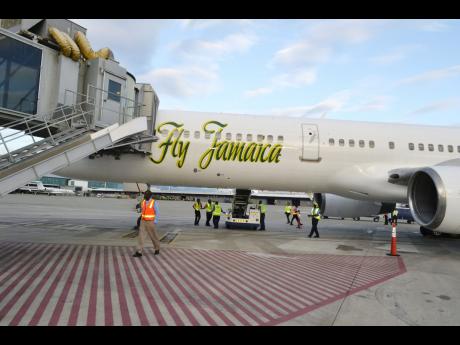 ADS Global Limited, a business process outsourcing (BPO) company based in St James, has been ordered by the Supreme Court to pay Fly Jamaica US$4.28 million or a little more than J$500 million, marking the end of a four-year legal battle.

The court also ordered the beleaguered Jamaican airline to pay ADS Global close to US$50,000 in contractual fees, which triggered the legal clash.

The orders by Justice Carol Edwards were handed down in the Commercial Court on Thursday in a lawsuit filed by ADS Global and a countersuit filed by the airline.

Stacy Knight, the attorney for Fly Jamaica, made it clear she respects the ruling of the court, but said the airline could have been awarded more.

"The bad image the airline suffered, this money can hardly compensate for that," Knight told The Gleaner yesterday.

"Fly Jamaica suffered a lot at the hands of this company that was supposed to have been acting in its best interest," she added.

The dispute between Fly Jamaica and ADS Global surfaced in 2014 after the BPO company was contracted to handle the airline's customer call centre as well as telephone and Internet accounts for its head office in New Kingston.

According to the airline's claim, Fly Jamaica was notified by ADS Global in May that year, via email, that the customer call centre arrangement would be terminated if outstanding fees totalling US$50,000 remain unpaid.

Knight said the airline acknowledged that it owed ADS Global for services related to the customer call centre, but questioned the method of calculation.

Three days after the notification, the attorney said the BPO company shut down its airline's customer call centre and instructed a local telecommunications company to disconnect all telephone and Internet services at Fly Jamaica's head office.

At the time the telephone and Internet were disconnected Fly Jamaica did not owe the telecommunications company, Knight said.

The judge, in her ruling, found that the airline was not given the 14-day notice stipulated in the contract before the shutdown of the customer call centre.

Knight said she was happy the court found that the action of the BPO company was unlawful. "They [the airline] was new at the time. It would have been hard for them to recover," she said.