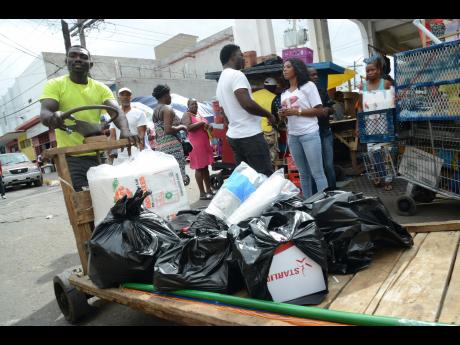 Rudolph Brown
‘Scandal bags’ used to pack all the products being transported on a cart in downtown Kingston last Friday. 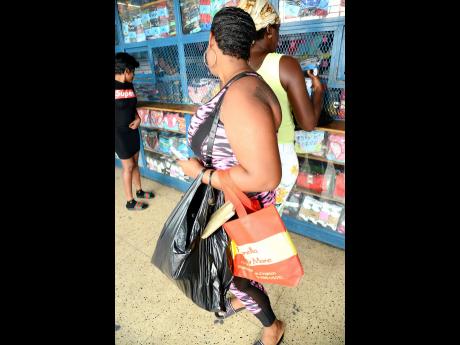 Rudolph Brown
A vendor in downtown Kingston with her purchases in a ‘scandal bag’ and a reusable bag. 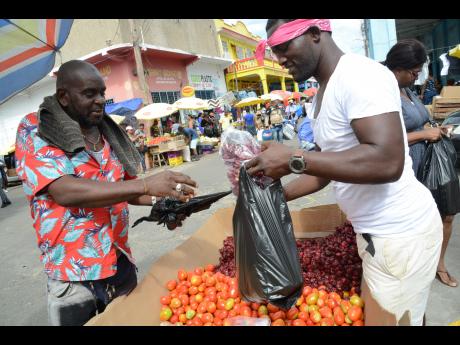 Rudolph Brown
Proddy (right) puts the sorrel in a transparent plastic bag before putting that in a scandal bag for his vendor Noel in downtown Kingston. 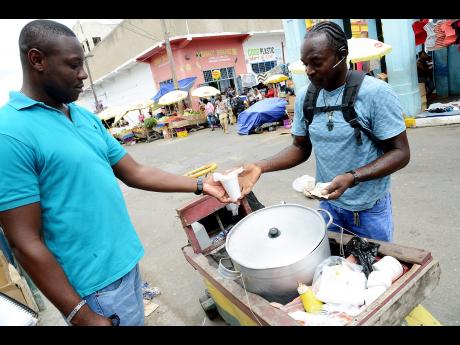 The Government's decision to implement the ban on single-use plastic bags, including the popular 'black scandal bags', starting Tuesday, has left scores of Jamaicans unsure of their next step despite a public-education campaign which was launched some two months ago.

Last Friday, several vendors, shoppers and business operators in downtown Kingston told The Sunday Gleaner that while they were aware of the looming ban, they were at a lost as to what will replace the popular bags and styrofoam containers.

"I sell fruits and things like melons, and not everybody a go can buy a whole melon so me have to cut it and put it inna plastic bags. Me can't sell melon and papaya, and pine in a paper bag or cloth bag, it no make sense," said Eric Gayle, who sells fruits and vegetables on his stall in the area.

"Even yam, first time you give them yam in a scandal bag but now everybody want it inna the small clear plastic bag. Even if them come with them own bag some fruits when cut can't just sell so. We can't stop them from ban it but at the same time what them a go bring in a what we a talk bout," added Gayle.

Another vendor, who gave his name as Ricardo, said he has been selling in downtown since 1993 and his customers find the plastic bags convenient.

"We can't fight the scandal bags, a the people them need to dispose of them things properly. We need scandal bags. A it we use fi work, them fi start charge some people big price to how them dispose them garbage because a it a mash up the thing.

"Paper bag can't work. We deal with water. Me a go cut a melon yah now, it can't go inna paper bag, them afi come up with something better than weh them a talk bout. Getting rid of plastic bags is a no-no for me," declared Ricardo.

At the many wholesales which dot the streets of downtown Kingston, almost every item is served in scandal bag, and neither workers nor owners seemed prepared for the change.

At one wholesale on Barry Street, the workers said they were aware of the ban and even though their employers do not speak English very well, they have tried talking to them about the ban and what they are going to present to customers as alternatives.

"Me tell them say them a go jail if them no stop use it Tuesday. Me make them know say the thing say people must walk with them bag go shop. When people buy whole heap a goods we ask them if them want the crocus bag and we give them that.

"Since no plastic bag no supposed to use, when them buy all a one item we haffi go give them in a them hand or maybe after a while them a go start bring them own paper bag from China cause," said one worker.

Melford Gaynor uses styrofoam cups to sells his peanut porridge from his cart on a daily basis.

"Me nah go lie down and dead. First time a did paper cup, so right there we going back, and people who buy from me love walk with them bowl, so we no even need cup. Me no worried bout it and eventually whosoever sell the cup for a living will soon find something else sell," said Gaynor.

Customers were also busy moving through the streets with their goods in plastic bags of varying sizes. Some shoppers told The Sunday Gleaner that they were planning to buy scandal bags by the bulk to use after Tuesday.

"A this morning me hear bout it a the shop when me go buy something. But me have bag a me yard like this," said one female shopper as she pointed to a small cloth bag.

"Me no too worry because rubbish truck come a me yard every week so me just a go carry the garbage in a me hand to the truck," added the shopper, as she echoed a concern of many Jamaicans who use the scandal bags to dispose of the rubbish.

"We can't dispose of the scandal bags just so. We have to use them to dispose the rubbish. The big garbage bag we nah go full up overnight and we have to go throw them out every morning. The Government will have to rewind and come again, because a no the scandal bags a the problem, a the plastic bottles.

"When you look in a the drain and the sea a the plastic bottle you see. Me still a use my thing till them give me a better solution," said Noel, who was also shopping downtown.

No delay, no backing down! - Defiant Vaz says ban on single-use plastic bags and styrofoam will take effect on Tuesday despite calls for delay
Editors' Forum | Refuse the plastic bags - NEPA urges Jamaicans to make the switch to reusables
JHTA throws its weight behind the proposed ban on plastics and styrofoam