Holland-based consultant is first individual to adopt a clinic 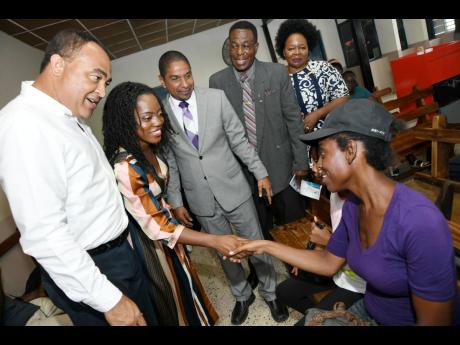 A Jamaican living Holland has chosen to give back to her homeland and the health facility at which she sought treatment as a child, pledging upwards of $3 million over the next three years to adopt the Olympic Gardens Health Centre in St Andrew.

The donation brings the number of clinics taken under the wings of private entities or individuals to 16.

Yesterday’s signing of a memorandum of understanding between Ann-Murray Brown and the Ministry of Health and Wellness, the authority managing the adopt-a-clinic programme, will see Brown donating upwards of $1 million to the clinic each year, until 2022.

Brown is the first and only individual to come on board so far, joining several companies that have adopted other clinics in other communities.

Part of her responsibility

She describes her decision to take up the facility as part of her responsibility, for reasons which include her learning from her mother’s gracious giving to children and others.

“Mom, who used to clean people’s floor, wash their dirty clothes and she would give her last. I saw her always giving. I remember I used to come to this clinic, because I was suffering from eczema, and one of the doctors said to Mom, ‘You have to work hard to send her to school to ensure she does a job where she doesn’t have to use her hands, because her hands and chemicals won’t work out’. This clinic was instrumental.”

...’Blessed greatly, give back greatly’

Despite not having a strong financial background, Ann-Murray Brown secured a number of university degrees and is today an international consultant to numerous non-profit organisations across the world.

“I did my first degree at The University of the West Indies in sociology and psychology, then went back to get a Master of Science in social policy at the Sir Arthur Lewis Institute of Social and Economic Studies,” she said.

“After that, I got a fully paid scholarship from the South Korean government. I then got a job at the United Nations and then migrated to the Netherlands. I now own my own business, doing evaluations for non-profits.”

Brown told The Gleaner of ambitions to have her service club, the Rotary Club International in the Hague, Holland, to do what it can to assist the more than 80 clinics in Jamaica that are yet to be adopted. Fifteen have been adopted by companies, and Brown is the first individual to do so.

“I encourage others to give back. It is not about me. I am the first individual to adopt. If you have been blessed greatly, give back greatly. Always give back to the measure you were blessed. I sit on the international projects committee of the Rotary Club International in Hague. I sit and decide on projects to support in Africa. I want to do the same for Jamaica.”

She continued: “Before I can do that, I have to lead by example. I have adopted one clinic and there are 84 more that need to be adopted in Jamaica. I can say I have used X amount of my own money and you can follow suit.”

Health and Wellness Minister Dr Christopher Tufton told The Gleaner that “the programme is progressing well. This one, though is very nice because this individual comes from the area and is giving back on her own.”