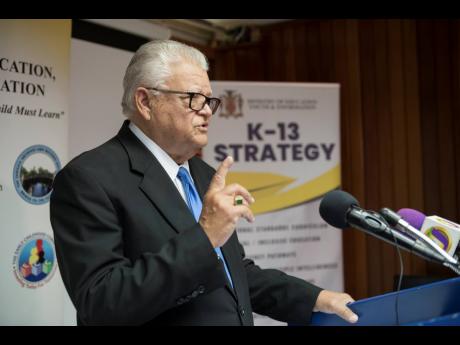 As the new school term gets under way next week, there are concerns about traffic management in the Corporate Area as a number of projects have missed their projected deadlines.

Karl Samuda, the minister with responsibility for the education ministry, yesterday called on the Jamaica Constabulary Force to deploy sufficient police officers to direct traffic in an effort to prevent undue delays.

“I have made reference to Superintendent Radcliffe Lewis, who I thought was the finest example of commitment, determination, and purposefulness in his manner of dealing with traffic in challenging situations,” Samuda said at a media briefing yesterday. “It is the kind of example that I think should be emulated in the force. I’m asking the commissioner of police to ensure that more people like that are brought to bear on these centres of traffic, like Manor Park, so that we can get those children to school on time.”

The National Works Agency, in a press release yesterday, said that there will be traffic changes and restrictions, effective September 1, on Constant Spring Road and on Marcus Garvey Drive.

He further clarified that Central Avenue will still operate as a two-way for entities along the corridor, but vehicles wishing to access Constant Spring Road must use alternative routes, one of which is West Avenue.

The median along Marcus Garvey Drive will be reinstated, and Chesterfield Drive will only accommodate left-in or left-out traffic.

Shaw said that persons travelling on Chesterfield Road, heading towards the Portmore Toll Road or downtown Kingston, will no longer be able to turn right on to Marcus Garvey Drive.

Also, motorists travelling from the direction of Three Miles will not be allowed to turn right on to Chesterfield Drive.

The traffic signals at the intersection of Chesterfield Drive and Marcus Garvey Drive will be decommissioned.

Shaw said other improvements and changes would be implemented simultaneously along select roadways within the Corporate Area to positively assist with traffic management.

In the meantime, Shaw said that the NWA is now looking to make changes to the flow of traffic along South Avenue in Kingston as it seeks to reduce congestion levels along this corridor.

A one-way system is being contemplated for this corridor.