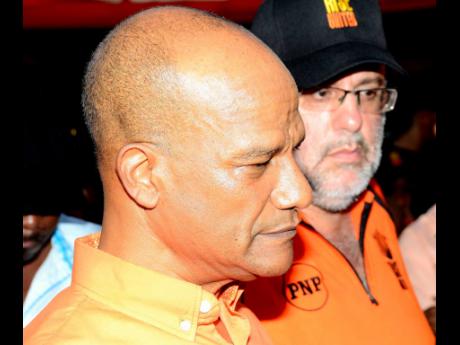 Peter Murcott Bunting’s dream of becoming the People’s National Party (PNP) president and prime minister of Jamaica ended in a nightmare yesterday when his challenge was crushed by incumbent Dr Peter David Phillips by a narrow 76-vote margin.

Bunting, who turned 59 yesterday, was hoping for a joyous celebration, but in conceding defeat, he said the response of voters had been inspirational.

“We have nothing to be ashamed of. It is clear that our message resonated with roughly 50 per cent of the party,” Bunting stated, congratulating Phillips and his team for the win.

“Forty persons made the difference. Forty persons who told us they would vote for us, but instead, voted otherwise. I thought that it would have been a decisive majority for the winner, and, obviously, my side. That would have caused the party to settle a little bit easier.”

He continued: “Close margins make it a bit more difficult to get it together, but at the end of the day, we accept the will and wishes of the delegates. They are the ones who participated in the process. They are the bosses of the party. We have achieved one of our objectives, which was to increase the energy levels within the party.

“At the end of the day, we are true democrats, and so we move on.”

START THE PROCESS OF HEALING

General Secretary Robinson said a process of reconciliation must take place within the PNP.

“Obviously, the margin isn’t big, so it means there is support for Comrade Bunting out there. What we have to do is to reach out to both teams and ensure that we start the process of healing and reconciliation. We had a bruising contest in 2008, and the party rebounded after to win the 2011 general elections. And so there has to be deliberate action to bring everybody together,” Robinson told The Sunday Gleaner.

Some supporters were heard celebrating the PNP but accepted that it was five more years for the ruling Jamaica Labour Party (JLP).

“Peter Phillips will be the only PNP leader never to become prime minister,” said one woman.

Even the elements rained on Bunting’s parade. The last half hour of polling came to an abrupt end as a heavy downpour descended on the National Arena, sending officials, delegates, and supporters scampering for cover.

Persons were stuck in large pools of rising water. Not even the golf carts were able to move as they had in the early hours of polling, transporting the elderly to registration and the voting area.

Earlier in the day, Campbell said the Rise United team had canvassed a number of delegates and it showed them winning.

It was the same for Fenton Ferguson, a former vice-president and long-time supporter of Phillips. Ferguson, the member of parliament (MP) from St Thomas Eastern who had put his support behind Bunting, said a win was expected.

Retired MP Dean Peart appeared also to have been deceived by the early polling.

“I have been here since early morning, and a swarm of people supporting Bunting have been here, anxious to vote,” said Peart, who supported Phillips in a previous leadership bid.

Peart said the energy of the presidential campaign had raised the party from the grave.

“We feel the turnout is very solid for us,” said Golding earlier in the day, noting that their canvass was done in a very surgical way and had been stress tested.

National Workers Union (NWU) head Granville Valentine said the union rose with Bunting, but it did not result in a win for the camp. Neither did the support of Manchester South Michael Stewart, who said 50 of the 57 delegates came to vote for Bunting.