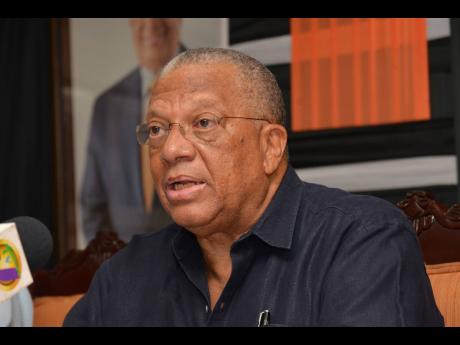 Billions of dollars of taxpayers’ money invested in irrigation infrastructure will go to waste if the Government goes ahead with plans to build out the new Bernard Lodge city in St Catherine. That’s the warning from Opposition Leader Dr Peter Phillips.

In addition, Phillips said, millions of dollars in projected earnings from local sales and exports would also be lost, and the country could stand to lose some export contracts, some of which were hard-earned.

Those were just some of the issues highlighted during Thursday’s tour of farms in the Bernard Lodge area by Phillips and Hugh Johnson, president of the Small Business Association of Jamaica, as the Government prepares to clear farmers from 4,600 acres of former cane lands to bring on stream the Greater Bernard Lodge Master Development Plan.

“Eighteen months ago, when you come here, the entire place was under production. The farmers were forced off. This papaya field that you are looking at, the man was given 21 days to pack up and leave. That is what is happening,” one farmer explained.

Phillips noted that there were a number of issues to be addressed, including improving transparency in the procurement process.

“There was no open general tender or offer of the lands that was made that anybody that was interested could have applied for it. The second question that needs to be answered is why would the country, as a whole, be asked to give up hundreds of billions of dollars of infrastructure in irrigation that has been put down here and maintained by successive governments, dating back to the 1980s?” he said, noting that in the second quarter of this year, Jamaica’s food import bill jumped by 18 per cent.

“We need to continue our determination to feed ourselves, and here we have not only export crops, but we see other crops that are aimed at feeding the country. We short of eggs, we short of chicken meat. We short of vegetables, and in fact, some of the farmers here were involved in cassava for beer production and other things ... ,” Phillips said. “If you want to get the four and five per cent economic growth, then you can’t just rely on big business operators to provide it. You have to create an inclusive economy so that new players can get on to the playing field.”

Phillips described the promise by Prime Minister Andrew Holness to have a comprehensive review of the project done as a meaningless gesture.

“Nobody knows – certainly, the country as a whole doesn’t know – who is doing the review. Are independent persons part of this review? Nobody knows the terms of reference. Nobody knows the results of the review, and so far, it seems to me that the review is a face card that is being put out there. ... This is our most valuable agricultural land and should be kept in farming,” he said. “We are not against developers or development, but we shouldn’t be using our prime agricultural lands for that purpose, and then you have the whole question of the environmental concerns.”

With an estimated 200 farmers to be affected, Johnson explained that some were forced off the land and it was only afterwards when they demanded compensation that the developers reluctantly relented somewhat.

Johnson accused the Government of failing to deal with broader issues, including environmental concerns.

“They are not looking into the danger to the aquifers as it related to covering this area with concrete, which will prevent the recharging of the aquifers.”

The Water Resources Authority of Jamaica and the National Environment and Planning Agency also came into Johnson’s firing line as he accused both organisations of making a 180 degree turn in respect of their assessments made fours year before, calling into question their credibility.