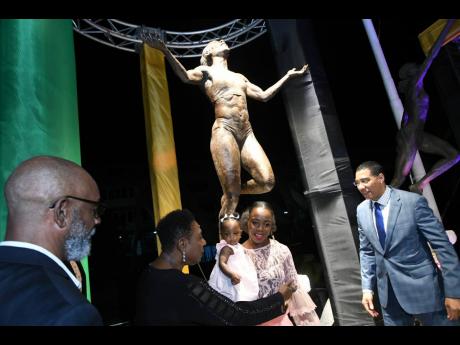 Veronica Campbell-Brown won her first Olympic medal in 2000 as part of Jamaica’s silver medal-winning women’s 4x100m relay team that included Merlene Ottey. Last night, the multiple Olympic and World champion was honoured with a statue in her likeness beside Ottey inside Independence Park.

The statue, sculpted by Basil Watson, is the third in a set of four commissioned by the Ministry of Sport to honour the nation’s latest sprint legends. Statues of Usain Bolt and Shelly-Ann Fraser-Pryce have already been mounted, with one dedicated to Asafa Powell to round out the set.

At last night’s ceremony to celebrate the achievements of the 37-year-old Olympian, who rose to become one of Jamaica’s most decorated athletes, Prime Minister Andrew Holness saluted Campbell-Brown – or VCB, as she is affectionately called – saying that her résumé was built on the hard work that she has put in throughout her career.

“The story of VCB is not of one being born with any gold spoon or ease of passage or anything that would guarantee success,” Holness said. “The story of VCB is like the story of our forbears, one of endless devotion to duty and calling, hour upon hour of the kind of regiment and sacrifice that underscores the success in the field.”

“This statue will serve as an inspiration for a new generation of track and field stars, now and through the ages,” he said.

“As all who come to view the statue will be moved to emulate and become, as she said, the best they can be in whatever area of track and field that they chose,” Blake said.