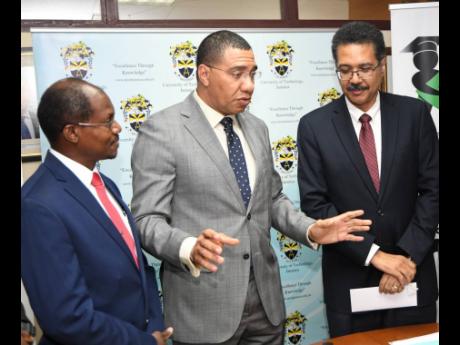 Jamaica Labour Party (JLP) leader Andrew Holness described Friday’s donation of J$2.5 million to the University of Technology Jamaica’s (UTech) scholarship fund as a “no-strings-attached” grant geared towards alleviating the financing challenges of needy students, especially those at risk of deregistration and disbarment from examinations.

A similar contribution was made to The University of the West Indies, Mona, yesterday.

But Holness, who is also Jamaica’s prime minister, pledged that neither the JLP nor the foundation would have a hand in the selection of beneficiaries. He, however, laid down some selection guidelines, insisting that students be made to understand that they needed to give back.

“They don’t have to express gratitude, but what we want them to do is to pay it forward. To either give service now or when they have [a] chance, when they have gotten employment, to contribute to their university,” he said during the handover at UTech’s boardroom.

The JLP Education Fund, which was launched in July, has granted five students full scholarships and six others partial scholarships. The fund has also issued 136 bursaries to workers or children or wards of workers of the party.

Among the stipulations governing the disbursements is that no beneficiary receive a grant exceeding J$150,000 and that students commit to a specific number of hours of voluntary service. Recipients are to be means-tested.

The prime minister also used the occasion to inform UTech president, Professor Stephen Vasciannie, that he had followed the progress of news of his pending departure, as well as other developments, but had opted not to intervene.

“I want to thank you for the service you have given to the university. I’ve seen somewhere, read somewhere, that you are moving on,” Holness told the educator.

“You have read correctly,” quipped Vasciannie, who will demit office at year end.

“The Government of Jamaica appreciates the service that you’ve given and we look forward to your continued service in other areas you choose to give service in.

Holness also pledged to implement reforms to tertiary education financing “in the next term”.