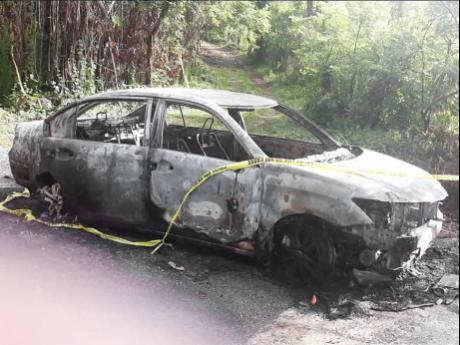 File
The car in which the burnt body of Tonia McDonald was found with the throat slashed at Sherwood Forest, Portland.

Popular Portland businessman Everton ‘Beachy Stout’ McDonald has been charged with the gruesome murder of his wife last month, law-enforcement sources have revealed.

McDonald and the two other men taken into custody last week in connection with the killing were charged late Tuesday with murder and conspiracy to murder by detectives at the Major Investigation Division.

According to police sources, investigators have a clear picture of the “planning” that led up to the death of Tonia McDonald on July 20.

The details are reportedly contained in a caution statement recorded by detectives from one of the businessman’s co-accused.

“The evidence is overwhelming,” said one source, adding that investigators also have voice notes and other forensic evidence.

Everton McDonald and his two co-accused, Donvalyn Minott and Aska Barnes, were taken into custody almost two weeks ago during a series of coordinated operations in Portland.

The three accused killers challenged their continued detention through separate habeas corpus petitions filed by their attorneys in the Kingston and St Andrew and Portland parish courts.

After hearing the applications, the courts ordered that the men be charged by 5 p.m. Tuesday or released.

The businessman’s arrest has led police investigators to review the May 2009 demise of his first wife, Merlene, who was shot and killed outside her home in the community of Boundbrook.