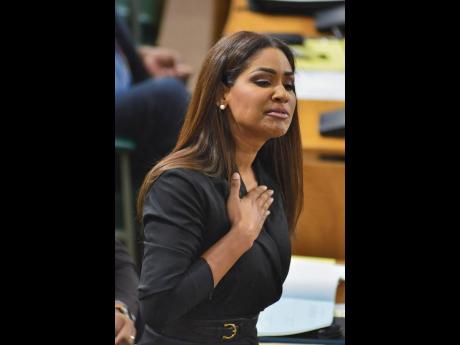 Lisa Hanna, one of the contenders in the race to become the next president of the People’s National Party (PNP), says Comrades who engage in nasty mudslinging should be sanctioned.

Hanna, who was speaking at a press conference held at the party headquarters on Wednesday, said she has been the victim of vitriol spewed, especially on social media.

“It is a problem, and while you cannot identify ghosts in the dark who throw arrows at you, certainly, the way forward is that members of the party understand that by damaging the brand of the PNP, you are eroding the trust of the electorate and Comrades. It is not Comrade-like to do it,” charged Hanna.

“Going forward, there has to be sanctions, especially for members who you can identify, who willingly go into the media and decide to discredit any candidate without proof.”

While Golding has publicly sought to rein in supporters from engaging in character assassination of his rival, former PNP candidate Basil Waite had harsh words for Hanna in a recent address.

Waite, who has taken a leave of absence from the PNP secretariat to campaign for Golding, resurrected Hanna’s Jamaica Labour Party antecedents in a bid to discredit her candidacy.

“Mark Golding worked with [Peter] Bunting and beat Shearer in 1993. I can tell you where I was on campus in 1994. I can tell you who wasn’t supporting me when I was running for guild president because you had some people who were Labour Party supporters coming against me because dem seh me a the PNP candidate.

“I can tell you who I saw campaigning for Labour Party when I was PNPYO president. So I know where Mark Golding was before 2007. I don’t know where other people were before 2007,” Waite stated.

In 2007, Hanna made her first run on the PNP ticket to win the constituency of St Ann South East.

For his party, Golding acknowledged that the culture of mudslinging has affected the PNP for several years and urged Comrades to have “respect for each other”.

Both candidates signed a declaration of unity on Wednesday, pledging to support each other regardless of Saturday’s outcome.

Both Hanna and Golding touted their readiness for the polls, which are being conducted by the Electoral Office of Jamaica.

“I am as a ready as I need to be for Saturday, and I am pleased with my campaign team. We’ve done the groundwork, and I am looking forward to Saturday,” Hanna stated.

“I am very satisfied with the way the campaign is going, the way the team has been performing, the response we have had on the ground and nationally, as well to the campaign,” said Golding.

More than 3,300 delegates are eligible to participate in the polls, which will open at 12 locations across the island.

Voting is scheduled to begin at 10 a.m. on Saturday and close at 3 p.m.