PM: I’ll be first to shut it down - Holness defends Puerto Bueno decision 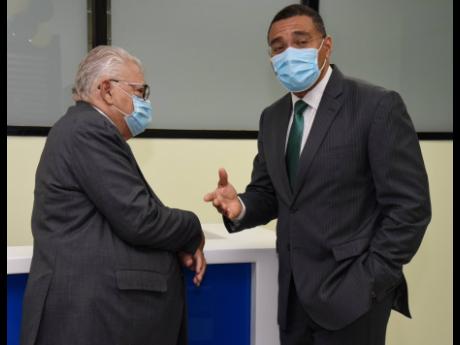 IT WAS not for money why the Government overruled the local environment watchdog in permitting mining in the ecologically sensitive Puerto Bueno Mountain in St Ann, the tourism-dependent parish on Jamaica’s northern coast, Prime Minister Andrew Holness has charged.

However, Holness’ promise that he will shut down the project if there are breaches is hardly convincing for residents and advocates who have expressed disappointment that the head of government is sticking with his decision.

Also bubbling is a growing call for the release of information on the decision-making process, with National Environment and Planning Agency (NEPA) CEO Peter Knight now saying that the decision to publish documents beyond the constraints imposed on the mining is up to the Holness-headed Ministry of Economic Growth and Job Creation.

“What won out was for more careful and comprehensive consideration of the environmental benefits and the economic and developmental benefits,” Holness told The Gleaner on Thursday after he launched his first public pushback against lobbyists who oppose the environment permit to Bengal Development Limited.

But interest groups, some of whose views the prime minister has discarded as “rubbish”, are not giving up on attacking the decision and are planning new strategies to register their displeasure.

It was an “enlightened” response to the need for economic growth while ensuring sustainable development, especially in a pandemic that has haemorrhaged tens of thousands of jobs and billions in revenues, Holness argued in St Ann’s Bay, where he had gone to open a $538-million parish office for the Ministry of Labour and Social Security.

Bengal has projected $635 million in taxes for the Government and up to 100 jobs from the quarrying and mining that will be done on 123 acres of a 569-acre property, whose owners include Duane Blake.

Those prospective benefits, and the massive plans for the rest of the property – ecotourism, residential, and commercial investments - may have been crucial to Holness’ decision to overturn the May ruling of NEPA.

NEPA had believed that Bengal’s project threatened the endangered and endemic species that inhabit one of the few remaining dry limestone forests in the Caribbean.

But acting with the backing of the law, Holness reversed the decision, noting on Thursday that the central question is “not that we should not disturb the environment, it is, how do you build … you have to build with sustainability in mind”.

“A strategy of protecting the environment is ensuring that people have livelihoods,” Holness said, noting that the land in question is in need of upgrades, citing the occurrence of illegal mining dumping.

“The truth is, if it is done properly, we would then have proper ownership of the land, put proper systems in place, and the environment would benefit from that,” he said.

Holness added: “The public narrative, as if to suggest that the Government is just going out there destroying assets without any form of consideration, that is not true … . I rubbish that.”

The Government is banking on the 72 conditions NEPA has applied to Bengal, the cost of which Holness said would be borne by Bengal.

“I’m the first one to shut it down,” the prime minister threatened, should Bengal violate any of the conditions.

The company has been asked several questions, but in a statement late Thursday evening, Kashif Sweet, Bengal’s managing partner, said public communication has been paused “until further notice”.

The company’s initial statement on Tuesday, in which it downplayed some of the concerns, and disclosed mitigating actions, came through C.L. Environmental, the same entity that did the environmental impact assessment on Bengal’s behalf.

Criticisms that the Government was prioritising economic and private interests to the detriment of the environment have been upsetting, Holness admitted.

“It hurts me deeply when people say that,” he said to an outburst from an exuberant nurse whose periodic applause was the only disturbance to the proceedings as the prime minister vented his frustration.

“Every single development must have as its main objective how to protect, preserve, and promote the environment,” Holness said.

“None of us can believe that NEPA’s decision has been overruled,” he said.

Holmes claimed that residents were kept in the dark and knew nothing of an appeal against NEPA’s refusal to grant a permit until he saw an email from the agency’s CEO.

“We were still very happy with the refusal from NEPA, which was issued on May 8, then lo and behold, without any consultation, we found out that the whole thing is gonna go ahead. We’re quite devastated,” he said.

Meanwhile, Wendy Lee, former executive director of the now-defunct Northern Jamaica Conservation Association, echoed Holmes’ point that residents had been left out of the process.

“It’s just complete contempt. None of the stakeholders were notified,” Lee told The Gleaner.

Hugh Dixon, from neighbouring Trelawny parish, and one of the most vocal advocates on preserving the ecological treasure that is the Cockpit Country, said mining would jeopardise the long-term economic and environmental development of Jamaica.

“We have to look at the opportunity cost of losing valuable assets for short-term financial gain,” he warned.

Several issues remain unclear and were not clarified by the prime minister, including the full cost of the project, the total financial benefits, as well as whether monitoring will be covered by Bengal.

Sections of the land were mined during the construction of the North Coast Highway between 2001 and 2008.

The Jamaica Environment Trust, residents of Rio Bueno, and the opposition People’s National Party have demanded that Holness reverse the decision.