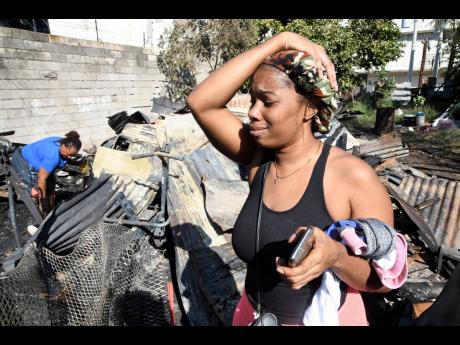 Rudolph Brown/Photographer
Tears flow yesterday as Tache Holt surveys the damage after fire on Wednesday destroyed the multi-family dwelling in which she lives between Church Street and Love Lane in Kingston. 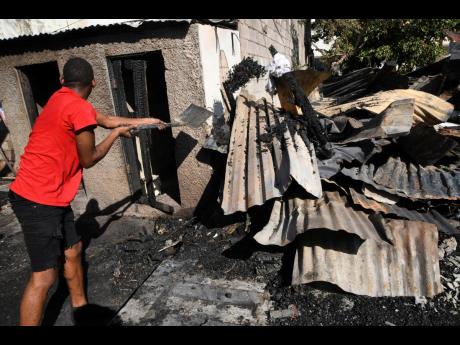 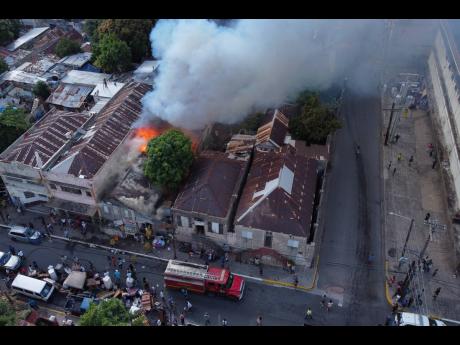 Gladstone Taylor/Multimedia Photo Editor
Residents pile appliances and furniture across the road on Wednesday as a fire consumes their multi-family dwelling in downtown Kingston.
1
2
3

More than 20 families have been dislocated with a pall of gloom hanging over their Christmas holidays on Wednesday after a fire razed their homes at Church Street and Love Lane in downtown Kingston.

Residents tried desperately to save some of their possessions, pulling beds and appliances on to the street as the mid-afternoon fire engulfed the buildings.

“Mommy, the house ketch a fire,” one little girl frantically screamed a phone while pacing the sidewalk along Beeston Street as she sobbed. The young girl, seemingly a preteen, then placed her hands on her head as two barefooted toddlers stood dumbfounded at her feet. One covered her eyes in shock, peeking at the blaze through her fingers.

While some were able to secure shelter from neighbours and friends on Wednesday night, the majority slept along the street, across from the burnt-out lot as police ensured their safety.

Yesterday, they rummaged through the charred rubble to see if any possessions had been spared the worst.

Seventy-eight-year-old Veleta Taylor watched from a bed on the sidewalk across the street. She told The Gleaner that she has been living at the property for more than four decades after experiencing a fire at her previous home along Spanish Town Road.

“A tribulation! There was a fire out a Spanish Town Road and I was there, and me still come back come feel da fire ya,” she said.

Omare Brown told The Gleaner that he had just walked through the gate of the property to see the raging fire next door, closer to the side of Love Lane.

“It was frightening. Scary. Mi nuh save nothing. Everything burn up for me. I was so busy helping," he said.

The flames had taken over his house by the time he was through pivoting between calling the fire brigade and helping everyone else. Yet, he said the moment became real for him only when the fire touched his outstretched hand as he attempted to pull an item from inside his house.

“Me just run out and leave it,” he recalled.

Tache Holt explained that there are hardly any residents left on Love Lane. The majority of the residents and all the children that live on that street had called 28 t0 30 Love Lane home.

“It’s so stressful,” she said. “ I was coming from work when I got the call. We are flat. Nothing has been saved,” she said.

She left the scene accepting an offer for her and her daughter to have a shower at a friend's house a few streets over.

Rudolph Anderson had just finished painting his home, brightening it for Christmas. The 55-year-old said he was lucky enough to have arrived from Manchester in time to save his refrigerator.

After seeing the incident while browsing through Instagram, channel programmes and promotions manager for Grace Foods, Ricardo Smith, decided they had to step in with a donation.

“What better way to try and just ease some of the pain that they are going through now than giving them a little token and hope that everything will be alright,” he said, as his team distributed 60 packages yesterday.

Social workers from the Ministry of Labour and Social Security were also at the location yesterday carrying out an assessment to determine the type of assistance needed by the families.

No injuries were reported.