When no news is good news - JCF celebrates suicide-free 2020, looks forward to better 2021 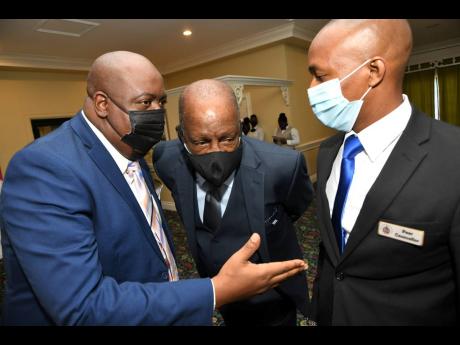 Chief chaplain of the Jamaica Constabulary Force (JCF), Pastor Dr Gary Buddoo-Fletcher, led law-enforcement officers into a praise break yesterday, highlighting that there had been no suicides within the police last year.

“Sometimes no news is good news,” he declared at the JCF Non-Geographic Formations No. II (NGF No. II) Chaplaincy Services Branch New Year’s Prayer Breakfast at the Knutsford Court Hotel.

Buddoo-Fletcher attributed this victory to the success of the “silent giant in the JCF” – the Chaplaincy Services Branch – which has been catering to the emotional and spiritual needs of the officers, with roughly 1,000 chaplain counselling sessions and more than 4,000 peer counselling sessions throughout 2020.

For the fifth consecutive year, approximately 60 law-enforcement officers ­– divisional leaders, commanders, and other senior officers, along with peer counsellors and chaplains – gathered to commit all front-line workers ‘Under His Wings’ for 2021.

“We believe that at the start of each year, we should commence with God,” said the Reverend Dr Courtney Faulknor, assistant chaplain for the NGF No. II.

He explained that the Lord’s guidance was absolutely necessary as these front-line workers continue to risk their lives every day for the protection of the country.

“I believe, as the spiritual caregiver of the JCF, that we should usher them into a time and moment of prayer,” he added.

Through praise and worship and prayer, they were keen in uttering thanks for making it through a difficult 2020 and also in claiming all things positive and victorious for 2021.

Dr Henley Morgan, former chairman of the JCF Services and Ethics Board, who was the guest speaker, asked them, “Why be a prey when you can pray?”, reminding them of the power and purpose of prayer in keeping with the theme ‘Under His Wings’.

“If you haven’t done so already, don’t waste time making a new year’s resolution. What we need is a new year’s revolution, and only prayer can produce that,” Morgan said in his address.

The families of Constables Fabian Morrison and Patroy Richards – two of the officers who died tragically in crashes last year – were covered during prayer for the bereaved families. There were other prayers for the police family, finance, health, protection, career, and emotional and spiritual stability.

With the onset of the pandemic last year, the NGF No. II launched the COVID-19 Operation Police Support (COPS) for the officers. As such, the prayer breakfast will be followed by a pampering session, ‘TLC at HEART’, in partnership with the HEART/NSTA Trust for 30 members of the formation on January 22. This is one of six events to be hosted throughout 2021. Among the others are a women’s conference on May 7 and couples’ retreat on July 29.