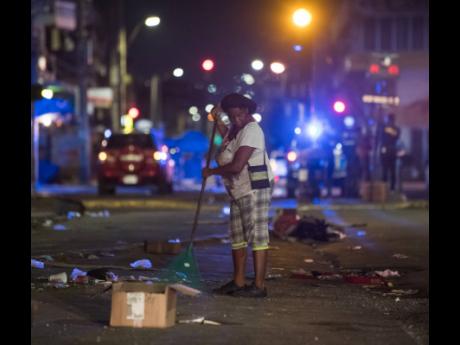 File
A woman cleans the streets of downtown Kingston on April 1 last year, minutes after an islandwide curfew took effect. Low-income earners are finding it difficult to abide by isolation and quarantine protocols, pointing out that they cannot a cut in their wages. 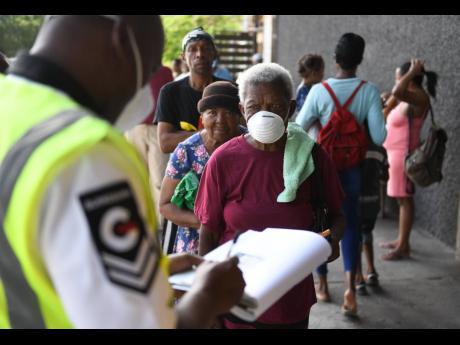 File
A security guard writes down the names of pensioners at the Central Sorting Office in Kingston last April to avoid having them standing close to each other and have them observe the social=distancing protocols while the building was being cleaned.
1
2

Jamaicans who literally earn their bread daily have been finding it difficult to adhere to COVID-19 protocols and remain isolated whether confirmed or suspected to have contracted the virus, saying they have to sustain themselves and their families.

For these low-income earners, even a week away from work or their hustles could spell disaster with mounting expenses and critical daily needs.

Persons having symptoms of COVID-19 are to make contact with their local health department, where they may be guided to take a test, if necessary; self-isolate; and work from home, if possible. An impossible ask.

Sandra Dennis*, a vendor by day and janitor by night, said she had symptoms of the virus weeks ago and was told to secure testing immediately, after she visited a local clinic.

However, Dennis admitted to throwing out the referral after she was told that she needed to self-isolate after the test, in the event that she was positive.

“Me a clean street now for about 40 years, and if I don’t work, I don’t get any pay. Cleaning is what I use to grow my children and what I use to sustain my myself and my immediate family now. If I miss a week, I may not have a job after because there are people waiting in line for a contract to work,” she told The Gleaner.

The single mother said she receives no benefits and her pay fluctuates based on the number of hours she is able to work.

“I can’t even manage to sit down one week, much less 14 days without working. The nurse said after I do the test, I had to call my boss to tell him that I will not be able to work until I get the results. I know how long results can take and I can’t work from home, so that wouldn’t work for me. Honestly, me throw out the paper,” she admitted.

Dennis told The Gleaner that it was not her intention to recklessly spread the virus, in the event that she was positive, but being programmed into survival mode, she had to act in the interest of her family.

“When I have no money, no food and nowhere to turn to, I can’t turn to Government to help me. The last time they gave out the money for those affected by the virus, I didn’t even get one cent because they said I didn’t qualify … . I have to look out for me because I don’t have anybody else doing it,” she said.

A Manchester-based security guard told The Gleaner that while he could sacrifice a few days’ income to self-isolate if he tests positive, he could not isolate while awaiting test results.

“I get paid fortnightly, and if I miss a whole pay it is going to be hard for me. People may say you nah go dead, but I couldn’t manage,” he said.

Regional director at the Southern Regional Health Authority, Michael Bent, said that he has not had reports of any such situations, but acknowledged the possibility of these breaches.

“I have no doubt that it could be possible and persons are disobeying … . Persons self-isolating should be monitored, but they can’t be monitored 24/7… . I am not saying it is happening, but it is a possibility,” he told The Gleaner.

He urged persons to adhere to the protocols, not only for their safety but that of the country.

At the recent monthly meeting at the Manchester Municipal Corporation, acting Medical Officer of Health Dr Shonette Blair-Walters reported that more than 250 persons who tested positive for the virus in the parish are in home isolation.

Clarendon’s medical officer of health, Dr Kimberly Scarlett, did not confirm t o The Gleaner whether she had received reports of breaches, but stressed that it was her duty to report such happenings to the police once notified.