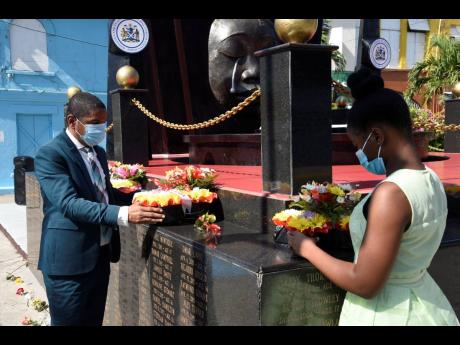 Nicholas Nunes/Photographer
Delroy Williams, mayor of Kingston, and Reajean Bennett, acting youth mayor, pay respect by laying wreaths on the Secret Gardens Monument, in memory of children who have died tragically, at the intersection of Tower and Church streets in the capital on Sunday. 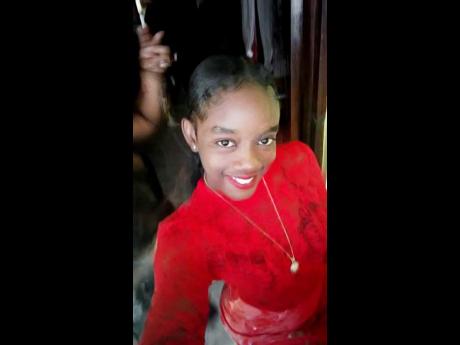 Seventeen-year-old Reajean Bennett bowed her head and said a prayer as she laid a wreath on the Secret Gardens Monument in downtown Kingston on Sunday in recognition of Child Month.

The monument bears the sculpture of a child crying and the base has the names of minors who were killed under tragic or violent circumstances.

It was established by the then Kingston and St Andrew Corporation in November 2008 as a poignant reminder of the more than 450 children who died in the previous five years.

Bennett, acting youth mayor of Kingston, said the monument tells a very sad story as her desire is for the nation’s children to soar.

“These killers need to change their lives and walk in the path of the Lord. They need to ask themselves, ‘Why am I doing such ruthless and heartless killings?’ No one has the right to take the life of a child,” she lamented.

The pain is still raw for Latoya Riley, the mother of 14-year-old Yetanya Francis, who left her Arnett Gardens home on August 23, 2018, to go to a nearby shop to purchase food.

She did not return home and a search was launched by residents of the community.

The nude, partly burnt body of the Kingston Technical High School student was found in an open lot about 11:30 a.m. the following day.

“The past two years have not been easy. Remembering things about her still makes me cry. When I see the young girls that she grew up with, I say, ‘Wow! Yetanya would be at this age now,” the mother said, as her eyes welled up with tears.

Sunday was her second time visiting the monument for Child Month, even though her daughter’s name has not been etched there.

Riley had one word to say to perpetrators: “Stop!”

“Every time I remember what happened, I cry. When I am abroad, I shop for me and her ‘cause she wears my shoe size. I miss her so much. I named her Yetanya and I also gave her the nickname ‘Princess’,” the grandmother said.

Chin hopes to start a foundation in her granddaughter’s honour with children, primarily those affected by violence, being the beneficiaries.

Meanwhile, Mayor of Kingston Delroy Williams disclosed that the Kingston and St Andrew Municipal Corporation is contemplating the buildout of the monument space to accommodate more names of children who have died under tragic circumstances.

The mayor said that the new design is also expected to celebrate the achievements of children.

Williams said that there was no “easy fix” for acts of violence, but appealed to child killers and abusers to “understand the devastation they create in the lives of families and communities”.