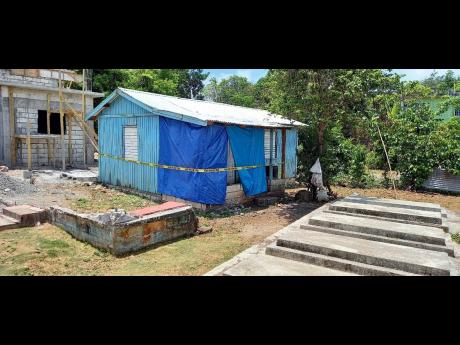 Photo by Gareth Davis
The house where Linval Lindsay and wife Annette Carby-Lindsay, who were murdered on Wednesday in Manchioneal, Portland, lived.

Rudolph Genius’ last memory of his mother was her jovial mood as she handed him $100 to buy food from a nearby shop on Tuesday.

But that cheerfulness was stilled in the wee hours of Wednesday when residents of Barracks, Manchioneal, were jolted by gunfire and the grisly discovery of the bodies of Annette Carby-Lindsay and her husband, Linval Lindsay, in the eastern Portland community.

The body of 60-year-old Carby-Lindsay was found with several chop wounds to the face underneath a bed in their one-bedroom board house.

Linval Lindsay’s was discovered with gunshot wounds along a roadway metres from the couple’s premises. Investigators theorise that Lindsay might have been fleeing his attacker(s) when he was cut down.

Police sources said that the two were probably killed between 1 a.m. and 3:30 a.m. A motive has not been established.

The couple lived near the square at Barracks in a one-bedroom house donated by Food For The Poor, with a family burial plot located at the front of the dwelling.

Residents have expressed shock at the gruesome killing in what has historically been the safest parish in Jamaica, with the fatal attack doubling the Portland’s murder toll to four since the start of 2021.

Latoya Allen, daughter of the deceased woman, fought back tears as she recalled that she last saw her mother about a month ago although they spoke every day on the phone.

“I am really feeling bitter and sad. I don’t think that anyone expected anything like this to happen, at least not to her, “said Allen.

Allen said that she learned of the shocking news from an aunt who lives overseas.

“She was a jovial and fun-loving person, who made friends easily. She was very outspoken and a no-nonsense person, who also jokes around a lot,” said Allen, who told The Gleaner that her mother had a mental illness.

It appears that Lindsay, 55, had a fractious relationship with Carby-Lindsay’s relatives and others in the wider Manchioneal division where Barracks is located.

“I know that it is because of him why this happen. I know nothing about him, only that he is married to my mother,“ Allen said.

Her comments were corroborated by Port Antonio Mayor Paul Thompson, who identified the dead husband as a source of controversy.

“It probably wouldn’t come as any surprise to anyone that he might be mixed up in some things,” said Thompson, who is the sitting councillor for the Manchioneal division.

But Angella Lindsay defended her brother’s character, saying that he had “no enemies that I know of”.

“My brother was very friendly and jovial,” she said.