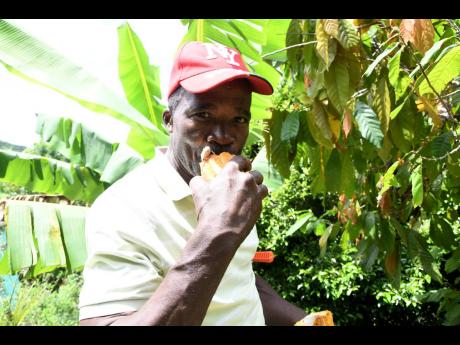 Rudolph Brown/Photographer
Cocoa farmer Garfield Hunter eats one of the fruits as he details the woes in accessing water in his community of Luna in St Mary yesterday. 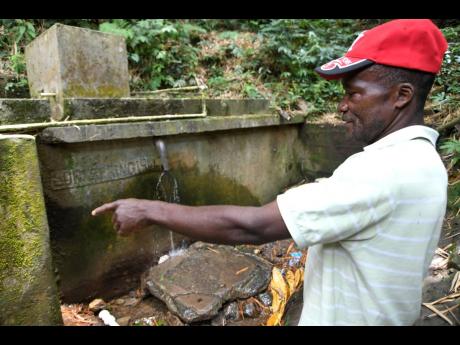 Rudolph Brown/Photographer
The overflow pipe at the catchment, from which residents currently fetch water.
1
2

The trek to catch water at the pumping facility in Luna, St Mary, is a treacherous journey downhill through a private property.

One step forward, two steps back, the residents said, as the pipes leading from the pump house were fixed just a month ago.

“Dem fix it and it buss again. The pipe dem no good. Dem wah change out,” said resident and cocoa farmer Glenfield Hunter. “A whole heap a burst up lines. Dem rotten.”

With no pipes to facilitate the pumping of water into homes in the community, the commodity runs wastefully into the bushes from the overflow pipe.

According to Hunter, the community has outgrown the catchment built in 1944.

Rainfall had damaged the original route to the pump house, and over time, the alternative track slipped away as well.

“If someone sick, a wheel we haffi wheel dem out pan chair, enuh,” Hunter told The Gleaner yesterday, pointing to deteriorating roads throughout the area.

“The road bruk weh come down and nobody, everybody turn a blind eye to it – MP, everybody,” he lamented, always dreading the walk back up with containers filled with water.

Hunter said that since the Jamaica Social Investment Fund fixed the road and built retaining walls 15 years ago, nothing further has been done to maintain the road in the St Mary South Eastern community.

Before then, the road was looking live a riverbed.

“We want the drain to maintain and the road fi patch out cause the water tek the road when the rain fall,” Hunter said, worried that the hilly terrain will slowly return to its previous state.

The National Water Commission (NWC) has confirmed that water was restored to the community following pipeline repairs that were carried out in April 2021.

“We are now being made aware of the recurrence of leaks. Repairs will be carried out on or before the end of next week,” the NWC told The Gleaner.

The company said that it had received reports in the past that the network had been tampered with. As such, it is pleading with residents to “desist from tampering with the network and allow for the system to operate as it should”.