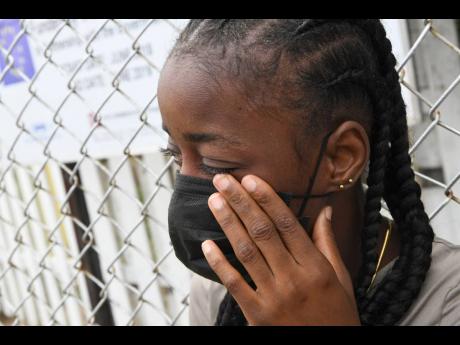 Rudolph Brown
An emotional Whitney Ferguson speaks to the media about her one-year-old son Romario McCain who was shot during a shoot out on Thursday between gunmen members of the JDF.

A gun feud between rival gangs in west Kingston and members of the Jamaica Defence Force (JDF), just metres away from the Zone of Operations’ checkpoint at the intersection of Beeston and Oxford streets in Denham Town, left a one-year-old nursing gunshot wounds. A man was also killed during the firefight.

Eyewitnesses told The Gleaner that two men rode up on a bike and the pillion aimed his weapon at a group of men along the road.

The brazen attempt at their rivals ended with the pillion being fatally shot and the one-year-old boy, Romario McCain, injured in the crossfire between gunmen and soldiers from the JDF, the Jamaica Constabulary Force’s Corporate Communications Unit confirmed.

Little McCain was sitting with his aunt, Teashian Thomas, at her gate when the incident happened. She was lyming with other residents when the bike pulled up. However, she claimed the shooter experienced some difficulties in his attempt at firing his weapon. “It looked like him gun stick. Same time the soldier dem start fire shot,” she said.

As a barrage of gunfire started, the 31-year- old said she immediately grabbed the child. “How mi grab him and hug him up we all drop. But mi a say mi can’t move, mi body feel heavy so me a think say mi get shot,” she recounted.

After attempting to crawl in the house with McCain while shots rained over her head, she saw blood running and realised it was coming from her nephew.

“A dat deh time mi whole on pan him, and him just a look inna mi face. Him naa say nothing, him naa show mi nothing. Him not even a cry,” she said. “You know when baby waa say something.”

Whitney Ferguson, McCain’s mom could not hold back the tears as she spoke to The Gleaner outside the Bustamante Hospital for Children.

She had just walked her baby to the theatre for the doctors to do further inspection of the wound and determine the way forward.

Ferguson said she fainted at work upon receiving the news and had to be rushed to hospital. “I have been trying to take at least one hour overtime to prepare for my son’s birthday that’s coming up,” she shared. McCain will turn two on July 28.

It has been a challenge for the 21-year-old mother who struggled to share the bad news with her son’s father who lives abroad.

The couple is particularly shaken up by the incident because this is their only child, given the miscarriage with their first son. “I always try to be strong for my son,” she said. “When the doctor took off the bandage and I saw it, I ran. A big hole is in my son’s leg.”

The young mother said that she has not grown numb to the violence around her but she was trying to put Thursday’s incident behind her and focus on healing and a better environment for her son.