Bowed with shame, ex-banker gets 7¹/2 yrs for fraud 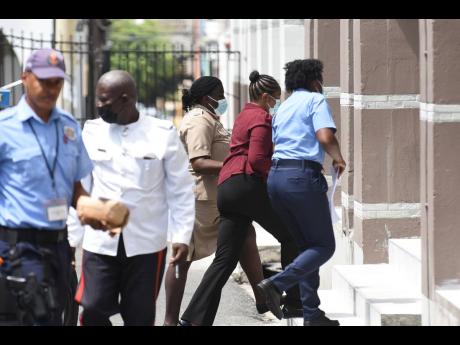 Kenyon Hemans/Photographer
Former NCB manager Andrea Gordon is escorted into the Supreme Court building in downtown Kingston on Monday to be sentenced for fraud-related charges in connection with the pilferage of more than $34 million from the bank.

The former National Commercial Bank (NCB) manager who robbed the bank of $34 million over a three-year period said she had struggled with her behaviour as she looted funds to finance a spending spree on clothes, handbags, and renovation of her four-bedroom mansion.

The 52-year-old woman, Andrea Gordon, who was on Monday sentenced to just under eight years in prison, also said she was extremely ashamed about the sense of betrayal she had caused friends, family, and co-workers.

However, the sentences, which were handed down by Justice Lorna Shelly Williams, will run concurrently, so she will serve seven years and six months in prison.

Despite an impassioned plea from Gordon’s lawyer, Vincent Wellesley, Justice Shelly Williams said that the substantial sum that was fleeced, the pursuance of personal gain, and the possibility of the bank losing consumer confidence weighed heavily in the decision.

She, however, credited Gordon for a favourable social-enquiry report, her guilty plea, and the fact that she had no previous conviction.

The judge, however, stressed that Gordon’s breach of trust, and the evidence against her, overwhelmingly influenced the sentencing.

The once-highly respected manager, who bore her soul in a social-enquiry report which was read in the Home Circuit Court on Monday, said that “to date she cannot think of anything worse she could have done”.

Gordon, who said she was humiliated by the scandal, expressed regret and apologised for “implicating” her son, Odaine Ffrench, in the multimillion-dollar fraud.

Ffrench, who Gordon said was upset with her, is facing fraud-related charges along with his father, Lloyd, in connection with the matter, is scheduled to return to the Kingston and St Andrew Parish Court on June 24.

The court also heard from her children via the social enquiry in which they asked the judge for leniency on her behalf and said they were in shock and disbelief when they learnt of her actions.

Odaine, who described his mother as his best friend, said that although he was puzzled by her behaviour, he believes she acted outside of character and that she made a genuine mistake.

Gordon, who sported a cornrow updo and who wore the same outfit from her last court appearance – burgundy blouse and black pants – appeared embarrassed and held her head down for most of the hearing as she sat in prisoner’s dock.

However, before the sentence was passed, Wellesley pleaded with the judge to take into account that she had owned up to her wrongs from the moment they were discovered and had pleaded guilty at the first opportunity.

He believes that her actions should have earned a 50 per cent discount on based on the Criminal Justice Suppression Act.

Wellesley further urged the judge to consider mitigating factors such as his client’s previously good record and her positive social-enquiry report which, he argued, outweighed the aggravating issue of her breach of trust.

HIGH ON THE HOG

According to the facts previously outlined in court by senior prosecutor Andrea Martin-Swaby, Gordon posted 282 transactions, totalling approximately $111.3 million, in which funds from the bank’s accounts were transferred to her and relatives’ accounts, including her children and spouse, as well as the accounts of familiar customers based on the findings of the bank’s investigation.

However, Gordon was only indicted for $34 million.

Based on the investigation, Gordon had used the fund to purchase clothing, accessories, handbags, Gibson Relays tickets, and to renovate her four-bedroom mansion.

Gordon claimed she stole the funds after fell into financial difficulties while renovating her house and because she needed the money to help a relative who had cancer.

The bank executive, who had been with NCB for 30 years at the time of her arrest, was earning more than $11 million annually.

The Financial Investigations Division has indicated that it will be moving to seize her assets. A case-management hearing has been set for July 9 for the forfeiture and pecuniary penalty order application.