EMTs: No place for us in crash emergencies 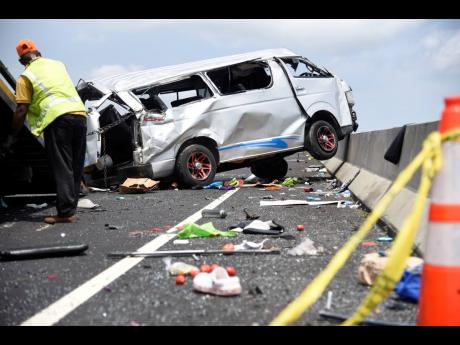 File
A wrecker operator prepares to remove a mangled minibus that was involved in a multiple-fatality crash on Highway 2000 on April 12. Emergency medical technicians are pressing to be included as first responders in automobile crashes.

The Jamaica Association of Emergency Medical Technicians (JAEMTs) is lobbying for its members to be among first responders on crash scenes to limit the likelihood of worsened injury or fatality.

That pressure is mounting amid the collapse of Jamaica’s ambitious target to reduce crash deaths to under 300, with analysts already delivering the grim forecast of a historic high 472 traffic casualties by year end.

President of JAEMTs, Basil Ferguson, said that there has been no movement on a decade-old request for EMTs to be incorporated in ambulance staff deployed from public hospitals to crash sites.

“The St Ann’s Bay Hospital and the Cornwall Regional Hospital are the two main hospitals that carry EMTs. KPH is starting a programme,” he told The Gleaner on Sunday.

The University Hospital of the West Indies (UHWI), the region’s main trauma centre, does not have EMTs on its ambulances, Ferguson said.

But Nordia Francis-Williams, the public relations and communications manager, said that the UHWI deals with interhospital transfers and does not have EMTs because it does not operate an outright ambulance service.

The number of EMTs operating in Jamaica is unclear because there has been no update to the 1,500 who were listed in 2018.

Though more persons have been certified since then, Ferguson noted that the field has suffered attrition as EMTs have switched professions or migrated to countries with higher incomes, among them the Turks and Caicos, Antigua and Barbuda, and the United States.

“The biggest issue that we have as an association is that technically, we are not recognised as a job category in Jamaica,” he said.

Ferguson believes that having police officers train as EMTs will decrease the number of road fatalities.

“There would be a big, big difference in the number. Something that we do not look at in Jamaica, too, is how many people are left paralysed from crashes,” he said, highlighting that many injuries have worsened because of how the crash victims are handled and transported to the hospital.

So far, Jamaica has registered 200 road fatalities as at Sunday.

Although some skills overlap, first aid offers training in CPR, the Heimlich manoeuvre, and other life-saving interventions while emergency medical care involves skills such as bleeding control and the safe lifting of trauma victims.

“The JCF has to understand its limitations. That is a whole other medical aspect, and beyond the training, we would need the appropriate tools, such as vehicles, to perform these services,” Lindsay said.

The Ministry of Transport is collaborating with the Transport Operators Development Sustainable Services for the launch of a first-responder training and certification programme for taxi drivers that will begin on June 10.