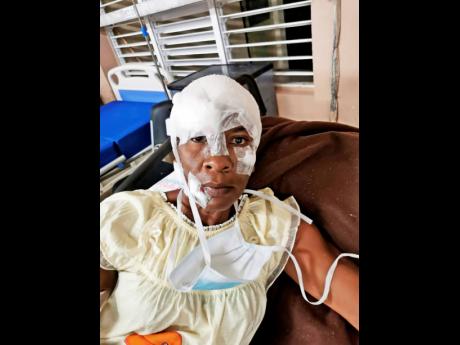 Photos by Carl Gilchrist
Bavette Watson-Balfour is recovering after being mauled by two pit bulls. 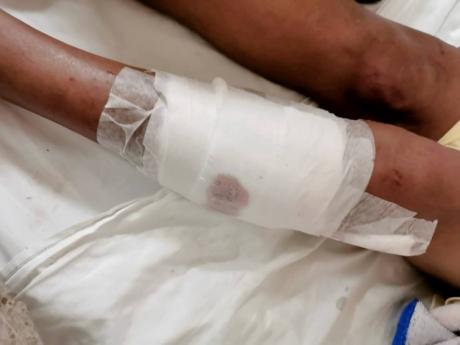 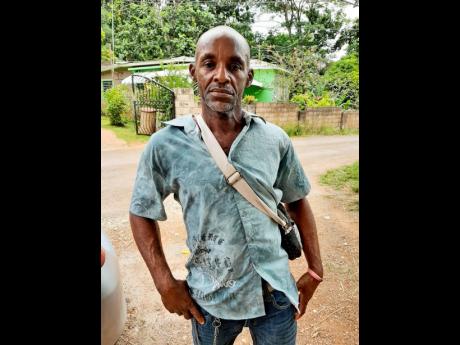 Justice Minister Delroy Chuck has urged the St Ann police to prosecute the owners of two pit bulls that mauled a 61-year-old woman after they wandered through an open gate on Saturday afternoon. The case offers the first major opportunity to test...

Justice Minister Delroy Chuck has urged the St Ann police to prosecute the owners of two pit bulls that mauled a 61-year-old woman after they wandered through an open gate on Saturday afternoon.

The case offers the first major opportunity to test the recently passed Dogs (Liability for Attacks) Act 2020, which imposes criminal liability on dog owners, including a fine of $3 million.

The victim, Bavette Watson-Balfour, suffered several bites in Eltham, Ocho Rios, despite showing extraordinary strength to fight off the dogs before help eventually came. She was rushed to the St Ann’s Bay Regional Hospital for emergency medical care before being discharged on Monday.

Watson-Balfour’s co-worker, Nigel Heslop, was also injured after he and others tried to assist the woman.

It is the second major dog attack in St Ann in seven months, after five-year-old Mickele Allen was attacked and seriously injured in November 2020 in St D’Acre, near Alexandria. Mickele is recovering from his injuries having undergone a series of surgeries.

“The Dogs (Liability for Attacks) Act 2020 is in operation and I certainly hope the police will prosecute the owners of the dogs and that the victim take out civil action against the owner,” Chuck told The Gleaner Monday evening.

“Over the last few months, i have emphasised and urged dog owners to control their dogs and I certainly hope that if the prosecution is successsful ... it sends a signal to dog owners of the dangers that uncontrolled dogs pose to members of the public.”

Watson-Balfour, who lives in Eltham, was making her way to work at the Ministry of Agriculture’s Eltham Training Centre, where she has worked for the past 33 years, when the dogs pounced sometime between 5 and 6 o’clock.

After hearing shouts of “Jesus! Help! Murder!”, Heslop, a groundsman who works at the institution, recognised Watson-Balfour’s voice and rushed to her assistance, being first on the scene.

But with help from the watchman Robert Walker and another co-worker, they eventually managed to subdue the ferocious dogs and encaged them in a garbage receptacle. The animals were later taken by personnel from the Jamaica Society for the Prevention of Cruelty to Animals, according to the victim’s co-workers.

In assisting the terrified senior, Heslop was bitten on the left arm and got his cell phone damaged after one of the dogs bit his thigh in the region of his pocket that had the phone.

Walker said when he reached the location, the gates to the premises where the dog’s owner lives were open.

“There were three dogs, but one was chained right at the gate,” Walker said.

“I was looking for a person with a firearm to just kill them because that was the only thing on my mind. The pit bull was jumping and wriggling, but she (Watson-Balfour) had him. She hold on to him tight!” he recalled.

Another worker corroborated Walker’s account of Watson-Balfour’s battle with the dogs.

“When I saw what was happening, I could only say, ‘God help her’,” the worker said. “Then I saw her hold the two dogs, one in each hand. She later told me that while the dogs were attacking her, she just felt a burst of strength and just reached out and grabbed the animals as they were biting her.”

“I’m grateful that God gave her the strength to hold on to those pit bulls so that she is alive today,” Watson-Balfour’s sister, Shereen Watson-Tennant, told The Gleaner.

“She was bitten all over – in her head, above her eyebrow, on her legs, thighs, arms, eye. I felt so horrible, but I give God thanks because she is alive,” she added.

Watson-Tennant said her sister is on antibiotics and is to do follow-up visits to the health centre, and also to visit an ophthalmologist to check on her right eye, where she was also injured.

“She is speaking to us, but she is in pain and her blood pressure skyrocketed. It’s down, but not [ideal],” Watson-Tennant said. It’s very traumatic because she’s saying when she goes to sleep it’s been played all over in her head, so it’s traumatising for her and for us, too, because I was surprised when I was called by my niece (to say) she was attacked and they rushed her to the hospital. She was covered all in blood. She had to be wrapped in sheets and sheets had to be placed in the car that she was taken in.”

Meanwhile, the attack on Watson-Balfour has brought back memories of November’s attack on little Mickele for her son Derrick Balfour, otherwise called Richie, leaving him upset and fearing that his mother could have a long road to recovery ahead.

“That (Mickele’s situation) a no pretty sight an now mi a see it real,” he said. “The dog them attack and bite up mi madda inna di wickedest way. The whole Watson family feel shook up ‘bout the thing and it nuh pretty.”