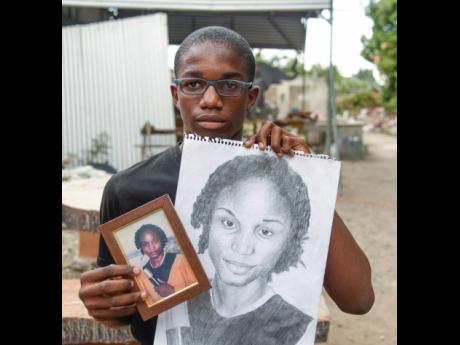 Nicholas Nunes/Photographer
Ajalon Cole, a Kingston College student, is experiencing challenges with his eyesight and is now encouraging persons to order a still portrait of themselves to help fund a new pair of glasses. 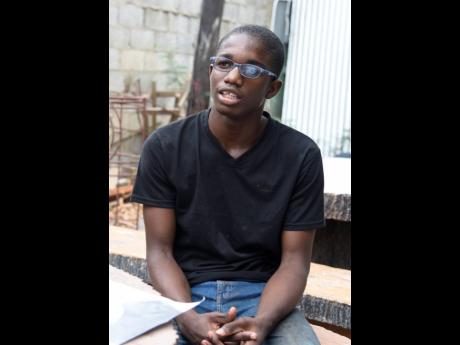 Ajalon Cole has taken on the task of sourcing the funds needed to pay for his glasses by selling portraits. The 15-year-old has been squinting for years and his parents only recently found out the extent to which his eyesight has been fading.

His mother Keisha Cole said he got his first prescription glasses when he was about to sit the Grade Six Achievement Test, now known as Primary Exit Profile, after his teacher recommended that he should visit an ophthalmologist because she noticed he was not seeing.

“Now going to the specialist, the specialist is telling me now that what should have happened is that he should have just gotten an eye patch over the good eye to retrain the other eye,” she explained. Instead, he was given a bifocal lens which has placed added stress on his good eye.

It is suspected that Ajalon had a falling incident that damaged his right eye when he was around one year old, and now he may lose sight of that eye. Currently, he is only seeing at about 25 per cent.

“That sign right there somebody can read it from 50 ft away and even at four feet away he is having problems,” explained his father Scheed Cole.

Scheed is the chief executive officer of Sculptural Elements and Construction 01 Ltd (SECTION 01), and is the sculptor of the Child Protection and Family Services Agency, CPSFA’s Mascot, ‘Mr Protector’.

Scheed explained that his son, who is a Kingston College student, has been very adamant about making his contribution to replacing the lenses that were broken last October.

“We find that it’s better to be involved,” he said in agreement.

The first glasses cost around $80,000, but they are not sure how much it will cost this time around as they are awaiting results from a series of tests done.

While his parents consider the option of corrective surgery, Ajalon said he was not open to that because he has heard of many people “losing their vision because of surgery”.

His family has engaged him in eye exercises to retrain his eye to focus, as he desires to use a more natural approach to get his vision back, or at least slow down its deterioration.

“I recently started but I have seen a bit of an improvement,” he said, thanking his father for pushing him to do the eye exercises as he wants him to grow as an artist and eventually take over the business.

In the meantime, they have created an Instagram page to display his work and facilitate inquiries @Ajalon876. Those wishing to assist can also call Scheed at 876-809-2909.