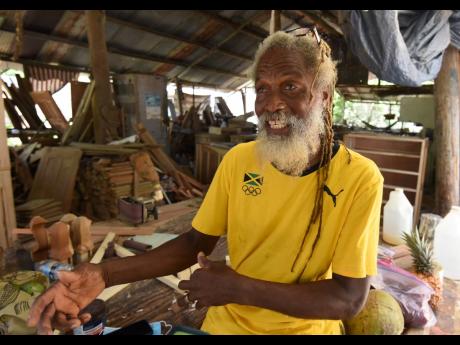 Kenyon Hemans/Photographer
Hensle Parchment says that he knew his son, Hansle, would have delivered the gold medal for Jamaica in the 110m hurdles at the Tokyo 2020 Games. 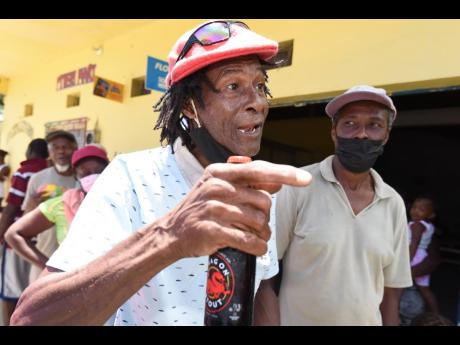 Kenyon Hemans/Photographer
Irodel Harrison of Seaside, St Thomas, is overjoyed on Thursday as he revelled in the 110m hurdles victory of his former neighbour Hansle Parchment at the Tokyo Olympics. 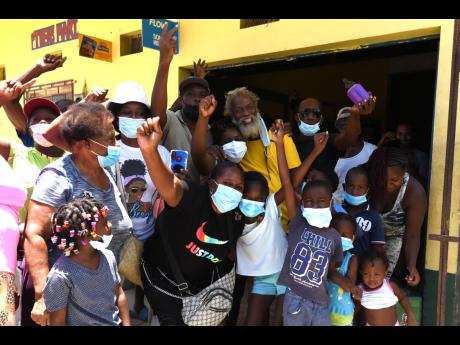 Jumping over zinc fences and bearing the weight of old tyres as he ran up and down the hill of Cashew Lane in Port Morant, St Thomas, may have all contributed to the crowning of Hansle Parchment as the newest 110m hurdles Olympic champion....

Jumping over zinc fences and bearing the weight of old tyres as he ran up and down the hill of Cashew Lane in Port Morant, St Thomas, may have all contributed to the crowning of Hansle Parchment as the newest 110m hurdles Olympic champion.

Parchment, who won bronze at the London 2012 Summer Olympics, delivered a Herculean upset at the Tokyo 2020 Games in a season-best 13.05 seconds on Thursday.

As family and community members gathered at Seaside, the community where his father, Hensle, owns and operates a carpentry shop, the proud residents exchanged memories of their 31-year-old local living legend.

Though many are dubbing Parchment’s win a surprise, his father and those with whom he grew were confident that their ‘Betsle’, as some refer to him, would cop the gold medal.

Hensle told The Gleaner on Thursday that he was not fazed by the exceptional start of strong favourite for the title, Grant Holloway, the American who is World champion and second fastest man ever in the event.

“I knew he was going to win, and that didn’t change when mi see others in front of him,” said Hensle.

“Mi know that a him a bring the gold. That’s how he runs … . Him put them in front of him and then run them down. That’s what he always does.”

That analysis of the fast-finishing Parchment was spot on and captures his record of chasing race leaders to the line.

Hensle, a sight of pride and joy, shared that Hansle is his only son and the older of his two children.

The carpenter said that his son was a chip off the old block.

Hensle said he broke his right hand and foot in 2013 but has pushed ahead to continue working. He has also lost fingers.

That lesson of determination, he said, has been passed from father to son.

“He loves to go over the hurdles. When something happens to you, you get up and gone again. That’s a hurdle … . Just like me. I got injured more than once and I keep going. He is very determined, just like me,” said Hensle, hinting at Hansle’s struggles with injury.

An image of his son against the backdrop of the Jamaican flag is painted on the walls of his workshop.

Amid the excitement, residents who gathered near the mural are calling for a statue of their local hero to be erected in Port Morant Square. They also want the small communities of Seaside and Cashew Lane, where the champion grew up, to be renamed Hansle Town.

Jubilation spilled beyond his hometown to the wider parish as Jean Weiss-Sookie, with whom Hansle shared a home in Leith Hall for a few years, described him as a “humble chap who always aspired to go to the Olympics”.

Bertram Anderson, who sits on his management team, revealed that the past student of Morant Bay High School had considered himself race-rusty going into the Olympic trials.

“Hansle would have been through so much in the past few months. He had a fracture, and he didn’t really start training until about May, but he was determined that he was going to make the team and medal,” said Anderson, president of Morant Bay High’s alumni association.