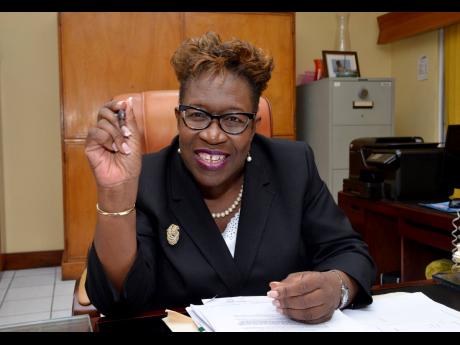 The Office of the Director of Public Prosecutions has been rocked by the resignations of at least five prosecutors last month amid reports of simmering discontentment over poor wages, heavy workloads, and the leadership. Workers have complained...

The Office of the Director of Public Prosecutions has been rocked by the resignations of at least five prosecutors last month amid reports of simmering discontentment over poor wages, heavy workloads, and the leadership.

Workers have complained that they are unhappy with the leadership style of Director of Public Prosecutions (DPP) Paula Llewellyn, whose management regimen has been described as archaic.

The DPP, in rejecting the reports of unease in her office, admitted that some prosecutors have resigned from apparent concerns over salary.

“It’s really bad, but I don’t think anybody wants to talk about the work situation at the office,” one worker told The Gleaner on Wednesday.

According to the employee, the workload is enormous and has been exacerbated by the suspension of jury trials because of COVID-19 restrictions.

“Imagine having 100-200 files to prosecute for a four-week period, having to read all those files.

Another worker complained about the burden of additional responsibilities such as police training and the conducting of research for mutual legal assistance, extraditions, and other matters.

“I think she means well, but her leadership style is outdated and lacks innovation. She believes in service above self, overwork, and burnout,” the employee said.

They claimed that staff are suffering from low morale and that 13 prosecutors have resigned, including seven last month.

However, the DPP denied that 13 prosecutors had jumped ship.

She said that four of the prosecutors had been promoted, six resigned between April and August, and one was seconded.

“How I look at it, if people want to leave, go ahead and leave. Go ahead if you’re going to greener pastures, but I have never stood in anybody’s way, and I think we have survived and have done very well,” Llewellyn said.

The DPP, however, concedes that the workload is huge and that salaries are woefully inadequate. But she cautioned that persons who have committed to serve as Crown counsel must be prepared for increasing workload in a high-crime environment.

“This work, the character of it, the kind of dedication, the commitment to service above self, is not for anybody, and like in any other job, if you find yourself in a job that is not really suited for your capacity or what you have to give, then what you do is move on and find another arena which suits you better, which may be easier,” Llewellyn said.

The chief state prosecutor said there were about 27 Crown counsel when she joined the office, but that number has grown to 58.

The DPP also sought to defend her stewardship, noting that she believed in working hard and giving of one’s best.

“I make no apology for embracing the work ethic that I embrace. Anybody who does not wish to embrace that work ethic, they are free to go and to do something that is less taxing,” she said.

A job advertisement placed in The Gleaner on Wednesday revealed that eight Crown counsel are being sought. Salaries range between $2,281,608 and $2,712,111 per year, plus allowances.