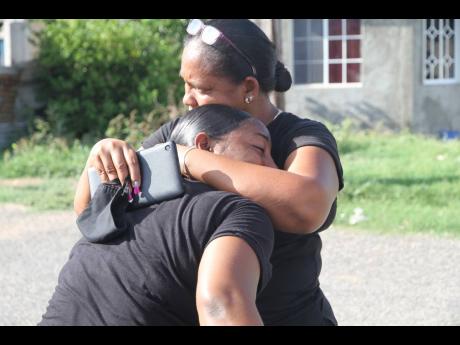 Nathaniel Stewart/Photographer
Family members mourn the death of Michael Solomon, who was among four persons killed in Havannah Heights, Clarendon, just after midnight Saturday. The slaying of Solomon and his partner Sherona Whyte has made an orphan of their eight-year-old son.

Police intelligence has revealed that last weekend’s Clarendon quadruple murder was ordered by an influential prisoner.

In a press briefing on Wednesday afternoon, Police Commissioner Antony Anderson made the revelation, noting that the family had been alerted of the danger but were hostile to law enforcers during their visit.

According to Anderson, a relative of the deceased sisters shot someone related to an influential person in the underworld a few weeks ago.

He said the incarcerated person ordered men to carry out a reprisal killing of the person who committed the first murder.

The police later carried out operations in Clarendon at the premises where the two sisters lived but failed to capture their target.

“We advised them that they are at risk from the information and intelligence that we had gathered and asked that he turn himself into us so that we could process him,” the commissioner said.

Of the 991 murders recorded this year, 72 per cent, or 714 of them, have been attributed directly to gang conflicts.

Golding called for the police to ramp up their presence in the area.

“This situation is one in a series that has taken place but represents a serious escalation and a change to the nature of the violence here, and it needs to be contained now so that the community can be free of further trauma and further grief,” Golding said.