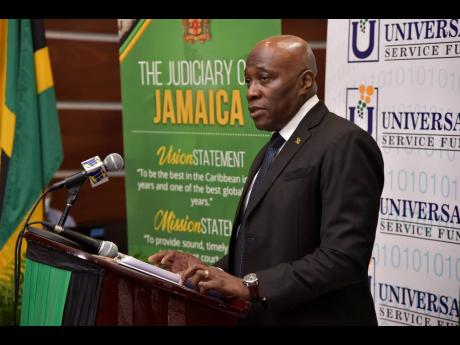 File
Chief Justice Bryan Sykes has praised the Revenue and Gun courts for their pace of delivering judgments.

By March next year, the appellate and Supreme courts are expected to clear their backlog of outstanding judgments.

Noting that the court system seemed to have had its most productive last year, Chief Justice Bryan Sykes disclosed that the Gun Court and the Revenue Court have achieved international standards in performance deliverables on judgments and the clearing of caseload.

The Gun Court has fewer than 10 per cent of the caseload in backlog and fewer than five per cent in net backlog, Justice Sykes said.

He added that Revenue Court cases should all be heard and determined by October.

The chief justice, during his address at the opening of the Michaelmas Term at the Supreme Court in Kingston, said that the Court of Appeal had significantly improved its rate of delivery for judgments, “falling just about three judgments behind in terms of where the strategic plan is concerned”.

“We have the Supreme Court improving in its rate of delivery of judgments, delivering 234 judgments for every 100 judgments reserved, and so we are on track for every outstanding judgment to be delivered by the latest March 2022,” he said.

While noting that the delivery of all outstanding judgments would be a historic development in the court’s history, he said that matters in the Commercial Division, which has dedicated judges, are also being disposed of more quickly.

Justice Sykes commended all stakeholders in the justice system who have partnered with the courts.

“All of you played a very vital role in helping us to achieve that significant milestone,” he said.

In keeping with the court’s plans to be more efficient, Justice Sykes also announced the establishment of a new court division, the Family and Probate Division of the Supreme Court, which started operating Thursday.

The Family Division will hear matters in relation to divorce, division of property, child custody and maintenance, some of which were being heard in the High Court Division of the Supreme Court.

According to Justice Sykes, two judges will be assigned to the newly formed division, which aims to improve efficiency and the rate of disposition of matters involving the family.

“When you have dedicated judges dealing with these family and probate matters, what you will have is expertise building up over a period of time. As a result, these judges will begin to deal with these cases faster and more efficiently and so avoid unnecessary delays.

“Our time standard is actually 24 months, and what we are aiming for is to have those cases completed within the 24-month time standard,” Justice Sykes said.