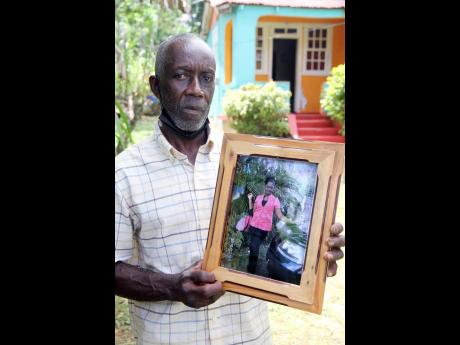 Nathaniel Stewart/Photographer
Ean Richards displays a photograph of his daughter Annakaye Richards, 32. The mother of two was murdered at home in Comfort, Manchester, Friday evening.

A grieving Ean Richards is still wishing that his daughter, 32-year-old Annakaye Richards, had heeded his agonising plea to flee for her life from Comfort, Manchester. About an hour after warming Annakaye’s dinner and bidding her farewell on...

A grieving Ean Richards is still wishing that his daughter, 32-year-old Annakaye Richards, had heeded his agonising plea to flee for her life from Comfort, Manchester.

About an hour after warming Annakaye’s dinner and bidding her farewell on Friday, Mr Richards was startled by a knock on his door, some time after 8 p.m., which heralded his two grandchildren.

They gave him the heart-stopping news that gunmen had kicked off the door to Annakaye’s bedroom and shot her to death while the children played in the living room.

Her death came after two attempts to set her house ablaze and several warnings for her to leave the community.

Mr Richards, who was aware of the threats faced by his daughter, said that Annakaye had insisted on staying at the premises because it had more space for her children.

“I can’t tell you say it’s coming from here or there, but that is a sign that someone is against you,” Mr Richards said of the firebombing omens.

“... Due to where she was at the other house, it’s just a small house, and because she needs space for the children, she seh out here is more comfortable for her, and the children can have their space to move up and down,” Richards told The Gleaner.

He acknowledges that his daughter might have grown comfortable and believed that the prior attacks would not recur.

Richards praised his grandchildren for their courage and quick thinking. When they heard the shots, the younger one, a four-year-old, didn’t scream, while the elder, a 12-year-old, grabbed his brother and headed to the bathroom, which had an exit to outside.

“They were so brave and smart. The little one didn’t even scream to make them realise that there is someone else in the house. The bigger one carry him to the bathroom. There is a door there. He locked the main door to the bathroom and escaped through the bathroom door and headed towards my house,” Richards said.

He said he has arranged for his grandchildren to get counselling.

“I got to be strong at this time. It nuh mek nuh sense I get weak,” he said.