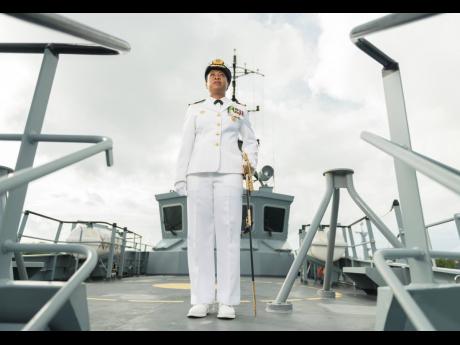 Beverley Anderson Manley, who played a pivotal role behind the scenes in the enlistment of the first four women into the army in 1976, has described the elevation of Commodore Antonette Wemyss Gorman to chief of defence staff of the Jamaica Defence Force (JDF) as a seismic shift in one of society's most powerful symbols of patriarchy.

At the same time, retired Rear Admiral Hardley Lewin, who saw great potential from very early in the senior officer who will take the reins of the JDF in January 2022, was blunt about her appointment. “Time come,” he declared.

The Defence Board made the decision on Wednesday to appoint Wemyss Gorman to head the army after interviewing three senior officers.

Wemyss Gorman, 48, will take leadership of the army in an era in which the Holness administration has advocated increased militarisation of national security, strategically relying on states of emergency and zones of special operations to combat the epidemic of crime and violence, with murders rising 10 per cent year-on-year.

But Prime Minister Andrew Holness, who is also the minister of defence, has been buffeted by a court ruling that the detention of five men under states of emergency was unconstitutional. The Government has appealed.

When Lieutenant General Rocky Meade retires from the force in January, he would have led the army for five years. Since 1998, only one chief of defence staff, Antony Anderson, has held the post for more than five years.

Wemyss Gorman's ascendancy, as the first woman army chief, is the culmination of a dream that started more than four decades ago.

“I think shattering is a more appropriate word because yes, we have made many cracks since International Women's Year, which was observed in 1975,” said Anderson Manley, who was the then wife of Michael Manley, prime minister of Jamaica from 1972-1980.

Discussing her instrumentality in getting women to enter the then male-only JDF, Anderson Manley said the policy change in a decade of tumult and social-justice reform occurred when the Manley administration had set up its first women's desk as part of the civil service.

This was in keeping with a mandate from the United Nations that observed International Women's Year in 1975 to heighten global awareness about discrimination against women.

Anderson Manley said one of the tasks at the time was to get as many women as possible into leadership positions, which is where the glass ceiling idea came from the North America Women's Movement.

One of the areas examined during the mid-1970s was how to get women into the JDF.

“I was excited to see that because the army all over the world is one of the most patriarchal institutions,” she noted.

Anderson Manley said that while there was an absence of public advocacy for women to enter the JDF at the time, discussions had been taking place within the ranks of the People's National Party's Women's Movement.

“If I remember correctly, this remains fairly private, with me convincing the prime minister, and he was easily convinced,” she recalled.

She said that Michael Manley was very open to tackling issues of injustice and never hesitated to break down barriers that created inequalities.

Having led the army as chief of staff from 2002 to 2007, Lewin has a suggestion for the woman who in four months will sit in the highest seat at the JDF.

“When you take over an entity, the first thing you do is to put your footprints on it,” he said on Thursday.

The former army boss has no doubt in his mind about Wemyss Gorman's capabilities to lead the JDF, noting that she has high levels of education, experience, and training.

Lewin said that gender plays no role in the demonstration of capacity to do a job.

“You are an officer, an officer of the requisite rank. Are you capable of doing the job associated with that rank? Gender, for me personally, was never an issue,” he said.

The retired rear admiral recalled that Wemyss Gorman entered the JDF as a Coast Guard officer when he was commander of that unit.

“My initial thing was that she struck me that if she stuck with it, and if given a fair chance, there would be nothing that would stop her,” Lewin said, adding that she later moved up the ranks steadily.