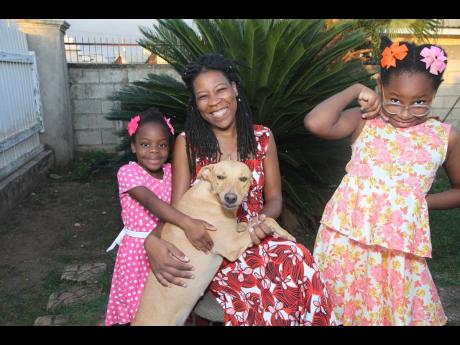 Nathaniel Stewart/Photographer
Lisa O’Connor Dennie poses for a photo with her daughters, Azania Smith (left) and Eliana Lightbourne, and the family pet. Lisa, 45, has been praying to meet her soulmate to complete her family, and possibly adding two sons.

Lisa O’Connor Dennie and her two daughters have embarked on a year-long prayer cycle and it is to find her Boaz – the faithful husband of biblical character Ruth – for Christmas.

O’Connor Dennie, who is 45 years old, told The Gleaner that she has no time to wait for him to come along, so she is speeding up the process by putting her request out there in the hope that fate will give it wings.

The mother of two daughters – one biological and another adopted – the pharmacist and business owner said it was always her wish to have four children.

“I started out late because of career and self-actualisation. I still have the desire to have two more children,” she said.

Now, all three are now wishing for the circle to be completed with two boys, and it would be a dream come true if they turn out to be twins.

Sharing on the urgency of her request, O’Connor Dennie told The Gleaner that she has large fibroids and she has to do a myomectomy to remove them, but could also end up doing a hysterectomy – surgery to remove the womb – so she wants to have her two boys first.

O’Connor Dennie said she and her daughters – Eliana Lightbourne and Azania Smith – have been praying for a very long time for a daddy and two baby brothers.

Recalling the first time the girls came to her with the wish last year, O’Connor Dennie said that she protested, telling them that she was too old. However, they made a believer out of her as they reminded her that Sarah – the wife of the centurial biblical figure Abraham – had Isaac when she was 90.

“I said alright, and since then, it has been our nightly ritual praying for a husband and a father for them,” she shared.

Although acknowledging that no one is perfect, she would like her future husband to be God-fearing and someone who she can sit and talk with when she comes home from work. He must also be able to help to grow her business.

“I want someone that when I am busy, he is there for them and he treats them like his own. I don’t want anybody to treat my daughters as if to say, ‘It’s your daughters and they are not mine’,” she stressed, noting that he must be family-oriented.

“I’ve already seen the world; I’m already completed, but it’s good to have somebody to share your life with and continue the story,” she told The Gleaner.

Eliana, the elder of the two girls, wants a daddy who is kind, loves God and can care for his family. She also wants him to treat her and her sister as equals and he should never harm their mother.

Her sister Azania’s request is simple: he must respect God, read his Bible all day long, and never fight with her mother.

Knowing she stands the chance of also attracting undesirable prospects, O’Connor Dennie said she is trusting God to direct the right person her way.

“I’m not one of those persons that will say, ‘What is mine is mine’, but ‘What is mine is ours’,” she said, “but we have to make sure we put aside something for our daughters and for the two baby brothers that they want.”

With less than three weeks to Christmas Day, O’Connor Dennie and her daughters continue to send up prayers and if their wish isn’t granted by then, they will have an answer early in the new year.