‘I am sick and tired of being in Norwood’ 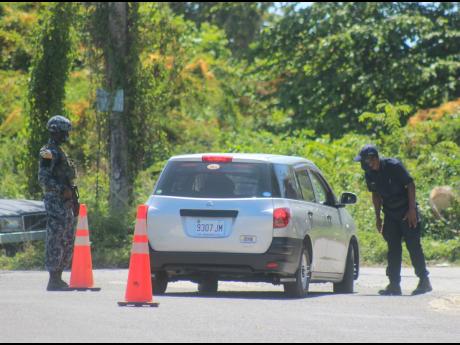 File
Members of the security forces speak with a motorist at a checkpoint in the zone of special operations in Norwood, St James, in this June file photo.

Some police officers assigned to the zone of special operation (ZOSO) in Norwood, St James, since the inception of the security measure in June are complaining of fatigue, saying that they desperately want to be reassigned to other duties.

“My New Year’s resolution is to be reassigned … . I am sick and tired of being in Norwood. Nothing nah happen up here. The violence stop, and the gangster them run weh. We are eating, sleeping, and getting lazy if you ask me,” one cop, who asked not to be identified, told The Gleaner this week.

“Right now, if you should go into the base, all you will see is sleeping policemen, and I am not talking the speed bumps you see on the road. I am talking about well-trained policemen who should be out there fighting real crime just sitting around or sleeping,” added the policeman.

Prime Minister Andrew Holness first announced the ZOSO in Norwood on the heels of 15 murders and 14 additional shootings in a mere six months in a community merely one square kilometre in size. He blamed heavily armed gangsters for transforming the St James North Western constituency of National Security Minister Dr Horace Chang into a killing field.

While the community is now calm, which is causing some of the policemen assigned there to complain about inactivity, many residents are of the view that if the measure should come to an end, those who have fled will return to the space as they still have familial ties there.

“The police just have to hold strain and bear it out,” a community activist told The Gleaner. “Since June, we have not had a single murder in this community, so it is clear that the presence of the police has made a big difference.”

At the start of the crime-controlling initiative, the police said that it would entail restoring law and order while instituting social-intervention programmes to better the community.

“ ... Another team will be coming in to do [the social-intervention] aspect of it, and we will continue to ensure that we keep the area safe in order for them to execute that,” police communications head Senior Superintendent Stephanie Lindsay had said.

St James has registered 156 murders since the start of the year, and several gangs are still operating in the parish, albeit with less ferocity than in recent years.

Another ZOSO currently in force in Mount Salem in the parish was established in 2017. Chang has given it his nod of approval, saying that it is was a model that has proven its worth both in terms of crime reduction and the redevelopment of the community.

“We are now seeing the results of what has been a zone of special operation, a coordinated and comprehensive approach to community development for sustainable violence reduction,” he previously said.