Gov’t to ramp up spending at early childhood level 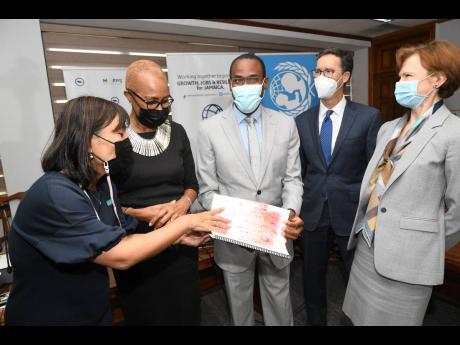 A World Bank study has concluded that education spending at the early childhood level in Jamaica is pro-poor, while at the tertiary level it favours the rich.

The findings were borne out in the study – A Public Expenditure Review of Jamaica’s Education Sector – undertaken by the World Bank, to analyse the adequacy, efficiency and equity of public spending on education.

Speaking at the launch yesterday, Education Minister Fayval Williams said that the Government will be seeking to fund more early childhood institutions across the island in the short term.

She asserted that the Government needs to have a bigger presence in the sector, as of the 3,000-plus institutions, only 10 per cent are government run or funded.

In the last fiscal year, Jamaica invested $114 billion or six per cent of its gross domestic product (GDP) in education.

Among the recommendations made in the report were for the reallocation of more resources to early childhood education.

A similar recommendation was made in the Jamaica Education Transformation Commission report, which was released in January.

“There are two initiatives under way. One is to transform, modernise and get more schools within the Government’s portfolio to ensure that the existing practitioners in early childhood become trained, so that they can perform at a higher level,” Williams said.

Going forward, she said that the ministry will be ensuring that the age four assessment is done in all early childhood institutions.

“We did that in 2019. It didn’t happen during the pandemic years because students had to be in school to get it done. That’s something we’re going to focus on because what that will tell us is exactly where on the learning scale that four-year-old is, so that we can use the next two years to make the intervention,” Williams said.

The education minister said the 2019 data showed that a third of students had issues with numeracy, literacy as well as behavioural issues.

In its review, the World Bank said there is an opportunity to improve tertiary education spending and the quality of early childhood education.

“The next step is to explore what is driving the somewhat higher expenditure on tertiary education and what would be some targeted measures, where you could maintain the quality, maintain the equity so that students from low-income families still have a chance to go to college, but also improve the efficiency of the spending and reduce the cost,” said Timothy Johnston, human development programme leader for the Caribbean.

Following this, he said there may be opportunities to reallocate spending to support early childhood education, which is critical for improving overall education outcomes.

The World Bank said the fiscal impact of such an action would be neutral, with an estimated $3.7 billion being reallocated in the long term.

The review also recommended that focus be placed on recovery from COVID-19, to mitigate student drop-out and reverse the learning loss.

Additionally, it suggested that the Government provide target financial support for the most at-risk students, facilitate remedial teaching, undertake re-enrolment campaigns and outreach activities and support new health and safety requirements for reopening.

Johnston said this has a potential cost of $2.4 billion to $3.4 billion annually, for the next one to two years, but the long-term cost of inaction is estimated to be $828 billion.

The education minister welcomed the review, noting that it reinforces the fact that Jamaica’s expenditure on education is relatively high and adequate when compared to that of other Caribbean states.

“It is imperative that policies and initiatives are guided by empirical data and the overview and recommendations provide much material for internal discussion within the education ministry and Government and with the wider public about possible shifts in policy priorities, areas of focus, and allocation of funding,” Williams said.

• The level of public education spending over time in Jamaica is adequate, but the COVID-19 pandemic is imposing additional needs on the education system.

• High expenditure levels in education have not resulted in comparably high education outcomes.

• Reallocation of resources across education levels could increase efficiency of spending.

• Expenditure in education is pro-poor in early childhood and primary education, neutral in secondary and favours the rich at the tertiary level.

• The school feeding programme is progressive to some extent, but does not reach all vulnerable students.