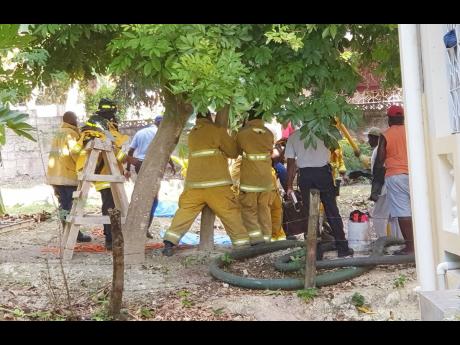 Photo by Janet Silvera
Emergency workers on the scene where landscaper Shane Lee fell to his death into a pit in Coral Gardens, St James, on Monday.

The freak death of a landscaper has triggered a caution to homeowners to ensure that their properties are free of occupational hazards.

The warning comes after 59-year-old Shane Lee fell to his death into a pit that was covered only with badly worn plywood in Coral Gardens, St James, around 11:30 a.m. on Monday.

The body of Lee, who worked as a gardener in the community for the last 20 years, was pulled from the pit at a home on Melrose Terrace Monday afternoon.

Audrey Tenn, president of the Coral Gardens Citizens’ Association, has urged householders to be their brother’s keeper.

“What would possess someone to take the [metal] cover off and not put it back?” she asked.

“... What if you had children running around in that yard?”

Lee had just bought lunch and was walking at the back of the house when he fell through the hole with weed whacker in hand.

“I heard him screaming for help and I saw when his shoulders went into the pit as well,” a neighbour, who asked someone to call the fire department, told The Gleaner.

“They were here within seven to 10 minutes,” she stated, adding that the cesspool truck made at least five trips before Lee’s body was recovered.

Angeline Reid, who supplies Lee daily with lunch, said he only ate fish. And while she served him on Monday, he told her he wanted to finish the yard before long because he had his electricity bill to pay.

Pain evident in her voice, Reid said Lee was a hard-working and quiet man.

Lyndon Rowe, a colleague landscaper who often teamed up with Reid, said that the late gardener worked solo on Mondays.

“He was loved by the residents of Coral Gardens and Ironshore. Most of them wanted him to work for them, they wanted nobody else,” Rowe told The Gleaner.

“He was my best friend. He was courteous and jovial. I am cut up inside.”