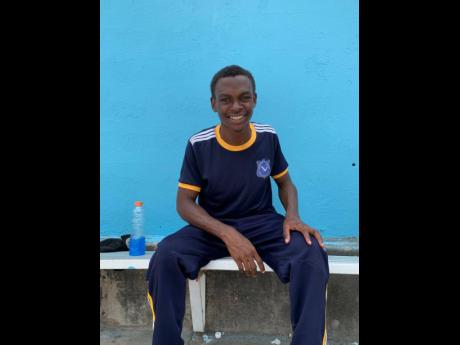 Sixteen-year-old Jace Witter’s dream to pursue a career in athletics has begun to materialise following his historic debut performance at this year’s ISSA/GraceKennedy Boys’ Athletics Championships at the National Stadium.

The fifth-form student at New Forest High School has made history for the south Manchester-based institution, which was founded in 2015, as its first representative at the championships.

He has been motivated to excel by his school and his family, particularly his parents, who are hearing impaired.

Witter came third in the semi-finals of the Class Two boys’ 100 metres on Thursday, with a time of 11.25 seconds, barely missing out on qualification for the final.

Witter also advanced to yesterday’s 200m semi-finals with the 10th fastest time. He placed fifth in his race in a time of 23.00 seconds, to end his 2022 campaign.

New Forest High head coach Andrew Bent said that with Witter’s inexperience competing at such a major event and the unavailability of standard resources for training, his performance ought to be celebrated.

“We don’t have a gym or any training facilities like other schools, but what we have is sand, and so along the Alligator Pond beach is where Jace would have done most of his strength-training work,” Bent told The Gleaner, also thanking Oshane Miller, who assisted in coaching when he was unavailable.

“Jace’s [100m] semi-finals day was very windy, but he was determined to come here and do his best. He was disappointed that he did not qualify for the 100-metre final, but we are very impressed with his performance,” Bent added.

With the institution being one of many feeder schools to other institutions with strong track and field programmes, Bent said he is hoping that New Forest will be able to continue to harness and retain talents to represent the school.

Speaking to The Gleaner following the qualifying heats for the 200m semi-final on Thursday, Witter said he wants to do better, make his family proud, and inspire other young aspiring track athletes.

“I feel great to be given this opportunity to represent my school and motivate the students there who need to know that they can do it, too, and be better than even Usain Bolt,” he said, referencing the legendary Jamaican sprinter and multiple world record holder.

He added: “This is something I have always wanted to do and I am here today. I just want to perform better in each event. My parents are so proud to watch me competing for my school against other competitive athletes and I just want to continue to do better. Come next year, [I aim to] do better and move to getting a scholarship.”

Having assumed the role of a second father to the athlete, due to their parents’ disability, Jace’s older brother, Kevin Witter, said he looking forward to what the future holds for his talented sibling.

“He is very hard-working and I have seen him striving for excellence most of the time and he has the ability to be very competent in what he does. We are happy to see him running on the big track at Champs and looking to see him do big things in the future,” Kevin said.

As the institution gradually rises to prominence as a result of its successes in national cultural competitions and academics with some top performers in the Caribbean Secondary Education Certificate exams, Principal Arnaldo Allen told The Gleaner that he is looking forward to adding athletics to that list.

With a second student – Gabrielle Merchant, who unfortunately did not advance in her 100m heats and false-started in the 200m heats – representing the school at the championships, Allen said this has lit a fire on campus, causing parents and students to express greater interest in the track and field programme.

As a result, Allen indicated that there is now a stronger need for an auditorium, gym, training equipment and persons with resources who are willing to buy into the school’s vision.

“We want to provide and nurture children with some semblance of doing well and achieving excellence with the environment that will help them blossom and grow into the best that they can be. Jace’s participation at this level, despite the lack of resources and the performance of our other students, sends the right message because New Forest is a school where you can send your children and see results,” Allen stated.