JRC to crank up train speeds 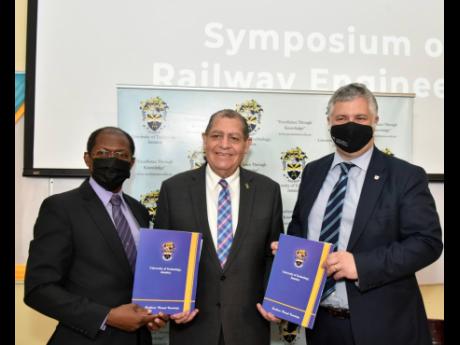 Kenyon Hemans/Photographer
Transport Minister Audley Shaw (centre) poses alongside Professor Colin Gyles (left), acting president of the University of Technology (UTech), and Professor Clive Roberts, head of the School of Engineering at the University of Birmingham, at a railway symposium held at UTech’s Papine, St Andrew, campus on Wednesday. An MOU is geared towards the restoration of rail service in Kingston.

The Jamaica Railway Corporation (JRC) will be seeking to increase the speed of its trains that run from Kingston to Montego Bay once the track is restored.

At the time the rail service was discontinued in 1992, trains chugged away at 30 miles per hour.

JRC civil engineering consultant Anthony Allen said there is a very flat track with curvature of between six and seven degrees between Kingston and May Pen.

“We can attain 50 miles and upwards between Kingston and May Pen, and this will considerably reduce the travel time and we could compete with the road traffic,” he said.

The universities signed a memorandum of understanding (MOU) to formalise collaboration on research, training, and innovation to revitalise the Jamaican railway industry. The agreement could also see the restoration of rail from downtown Kingston to Three Miles, as well as renovation of the train station at Pechon Street.

Allen said the aim of the Kingston to Montego Bay route would be to offer a more integrated approach and multiple transport options for commuters.

“We don’t want to find ourselves in a competitive mode because we are quite susceptible to sabotage and we have to be very careful, particularly in these communities where someone may feel like their livelihood is being threatened,” Allen said.

Meanwhile, he said the track on which the school train runs - from Linstead to Spanish Town and Old Harbour to Spanish Town - is being maintained by Windalco, the St Catherine-based alumina company.

“We have a little issue there because the passenger train tends to run at a higher speed than the freight train, and therefore that compromised speed needs to be corrected. We are in the process and we are cooperating with Windalco to ensure that this compromised speed is attained so that it will reduce the wear on the rail and at the same time increase the speed at which we can travel with our passengers,” Allen said, adding that the JRC is looking at restarting the passenger service shortly.

The engineering consultant said that the passenger train service could provide a higher level of safety when compared to the high number of road crashes and deaths.

He said that trains are also fuel efficient, and communities have been developed in areas such as Bodles in St Catherine, which is located about 15 minutes away from the train stations.

Allen said that the community largely depends on taxis for transportation and could utilise the train to Spanish Town and then into Kingston when rail is restored there.

“It has been 30 years now that passenger service has not been available. We literally have to rebrand, regroup and hope that we can capture the confidence of the travelling public,” Allen remarked.