A love affair with wicker 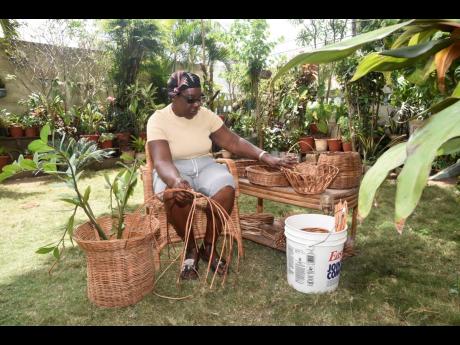 Nicholas Nunes/Photographer
Cynthia Cooke, a wicker furniture maker, gives a short tutorial on how to start the base of a basket during an interview on Tuesday. 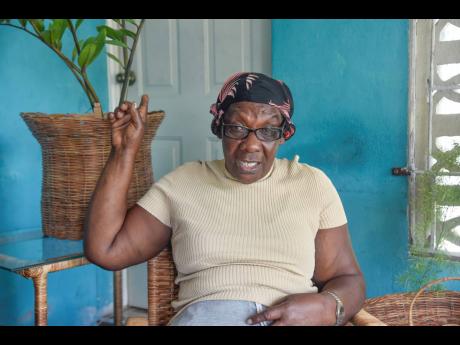 Gift and fruit baskets, centrepieces, and bottomless flowerpots are just a few of the items 65-year-old Cynthia Cooke makes from wicker, which is a pliable twig.

“To see my handiwork when I’m finished and to hear somebody say, ‘A you do it?’ I feel good. When I relax in a chair that I make, it’s a good feeling,” she said with much enthusiasm.

Cooke, who hails from Trelawny, came to Kingston as a teenager seeking employment.

She worked for a couple of years as a domestic worker and recalled that her interest was piqued by craftspeople making wicker furniture on Old Harbour main road.

Cooke watched with admiration each time she passed, even as she grew frustrated with her job.

She told The Gleaner that one Mr Blake encouraged her to leave her job to become a wicker craftswoman and she gladly did.

Her first stint was at an establishment on West Kings House Road and the then 24-year-old recalled that it took her a week to produce a chair.

“I was learning and I was getting a little stipend. I could go to the supermarket at the end of the week with it. I went on to work with David Matalon at Cariframe and there I did furniture, frames, and we also did export and I felt like more of a wicker worker there,” she reminisced.

She responded to a job advertisement seeking a wicker worker, but learnt, shortly after starting, that the role had more to do with the care of plants. The twenty-something flourished in that job and today she has a green thumb.

Cooke then met up with an old friend, Sylvia, who shared that she was the only female working in the wicker department at Joydan Limited on Molynes Road.

“I couldn’t do wicker before. Joydan was school for me because I learnt to work on metal frames. All along, I was only working with wooden frames,” she said.

“I worked at Joydan doing wicker ‘til I could make a one room. I left there and went to Unique Wicker on Molynes Road, as well and we were back and forth when things got slow.”

The wicker-duo thought about making baskets but didn’t have their own resources.

Cooke recounted that they walked from Half-Way Tree to Constant Spring to display their samples to potential buyers, some of whom made orders for three or six.

They then began to source the wicker in St Margaret’s Bay, Portland, purchasing as little as 20 pounds per trip. Sylvia died about five years ago but Cooke has continued the craft.

Over the years, Cooke also juggled wickermaking and repairs with vending at Excelsior High School.

Adults and students purchase baskets from her for gifting purposes, while flower shops purchase by the dozens.

Sourcing wicker in Portland is a day’s work and the following day usually entails soaking, stretching, and sorting of the wicker by size.

Cooke told The Gleaner that when working on large orders, she begins the base of all the baskets, sets them aside, and then operates along a production line until all are completed.

“A dozen baskets, depending on my speed, can take a week or less, or two,” she said, adding that the labour also differs based on size and design.

A key part of the craft is keeping the hands wet to make the wicker flexible, and after more than four decades, she can make some patterns with her eyes closed.

An impromptu visit to Portland or rainy conditions sometimes mean that she cannot source raw material, which presents the biggest challenge for the craftswoman.

With the closure of many wicker production establishments, Cooke said the industry is not thriving as it once did in yesteryear.

Cooke said it would be a joy if the manufacture of wicker products becomes a popular trade in Jamaica again, as the art is mainly practised among the blind and older folks.