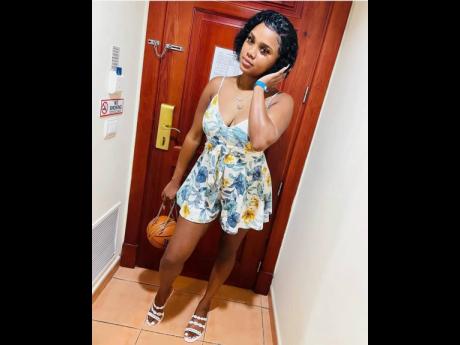 In the next five months, 22-year-old Torian Elliott would have graduated from Knox Community College with a bachelor’s degree in primary education, but that dream was crushed on Sunday when she and her unborn child died in a traffic crash.

Family in her home town of Ritchies in Clarendon are reflecting on the double blow of cruel fate, as Elliott’s mother passed away two years ago on May 16.

Firefighters took approximately 30 minutes in a desperate bid to rescue Elliott, as part of the metal rail along the embankment went straight through the vehicle, said Rohan Powell, deputy superintendent at the Mandeville Fire Station.

“She was a passenger in the front passenger seat of the vehicle. The car was badly mangled and she appeared to be unconscious at the time ... . Part of the rail had gone completely through car and she was under it,” he said.

Powell said that firefighters sought the assistance of bystanders to lift and remove the guard rail before cutting away the roof and sides of the car to unfasten Elliott.

She was pronounced dead at the Mandeville Hospital.

Moments earlier, Elliott, her boyfriend, and another person were travelling in a Toyota Crown motor car along Winston Jones Highway when they were reportedly hit by another vehicle that did not stop.

The driver of the Toyota reportedly lost control and crashed into an embankment about 7:30 p.m., according to police reports.

Stephen Williams, councillor-candidate for the Ritchies division, said the community has been hit hard by the news of Elliott’s tragic death.

“She was very quiet and jovial. As you encounter her, the first thing you see was a smile. I took it very hard because she grew in my hands,” he said in a Gleaner interview.

Describing her as a bright girl who had big dreams, Williams said Ritchies “is in total mourning now”.

Williams used the crash death to warn motorists against recklessness on the road.

Scores of persons on social media, including Elliott’s batchmates from high school and Knox Community College, have expressed grief at her passing.

“Torian was such a darling. When I heard last night (Sunday), I tried calling her, and when someone answered the phone and said she died, I passed out,” a schoolmate from both Bishop Gibson High and Knox who requested anonymity said in a Gleaner interview.

The friend, who operates a pastry operation, said she was to follow up with Elliott about a cheesecake order query she made last week.

“This is last thing I expected to hear. If I tell you I am OK, I would be lying. ... I am really not myself. I am lost out of this world,” the friend said.

“Tori was promising for the nation’s education system and would have matriculated at the end of this semester for graduation in October 2022. We do hope that all affected parties will find solace in time to come,” Ramgeet said.

– Cecelia Campbell-Livingston contributed to this story.