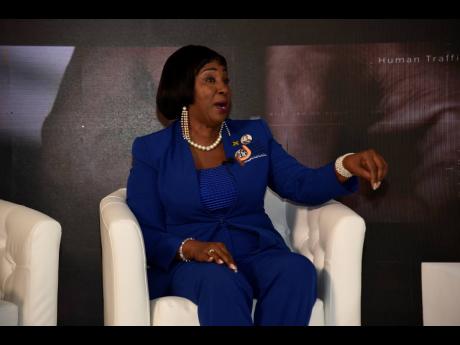 Nicholas Nunes/Photographer
Sandra Gipson shares her experience of being a victim of human trafficking during a panel discussion commemorating World Day Against Trafficking in Persons at the Courtyard by Marriott in New Kingston on Friday.

Sandra Gipson stands today as a resilient woman who survived trafficking and child sexual abuse at the hands of relatives.

With hopes for a better life, the then-14-year-old left Jamaica on a three-month visa for Florida in January 1979 to live with her father, who she had only seen twice before.

When she arrived at his house, he reportedly took her to a table and said: “This is the 45, this is the gun, this is the drugs and this is the money. He showed me the different measures – $30 for the ounce, half ounce for $15, dime bag and nickel bag of marijuana,” she said, adding that she was put to work on the first day.

Her father also gave her strict instructions not to remove the chain from the door but to answer the knock by asking for a name and order, take the money, hand over the drugs and then close the door.

“I had to sell until 3 a.m. in the morning, and on the weekends, my father and my stepmother went clubbing. I had no life. I had to cook, clean and take care of my stepmother’s grandson,” she said.

Gipson’s father lied that they were from Chicago and lost all their documents in a house fire in order to enrol her in school.

With very little time to focus on schoolwork, she became a C student as selling drugs and taking care of the household were prioritised.

“I thought it was legal in the US. How I found out it was not legal was the time when we got busted. I was out front playing and the SWAT team came … . They went to the back and arrested my father and stepmother,” she said.

'TOO MUCH FOR ME'

Her father was sentenced, but life did not get much better when he was released. Things also got overwhelming for the teen, with her alcoholic stepmother often causing friction.

“I decided one day that it was too much for me, so I took 11 Tylenols and said I was gonna take my life. I didn’t have a life, I couldn’t have any friends and based on the life that I was thrown into not by my choice, it was best to go,” Gipson said, adding that she called 911 shortly after taking the pills and was taken to hospital by ambulance and her system flushed.

Gipson was referred for a psych evaluation, but did not speak because her father and stepmother had told her time and time again that she came to the US on a one-entry visa and could be deported.

She ran away from home, ended up in the care of the state, and then requested to rejoin her father at home, though she knew the conditions were unfavourable.

“When I went back home, they were always having arguments, but the way they resolved the conflict was shooting at each other. We constantly had to be dodging bullets,” she recounted.

Gipson’s outlet was running and she had dreams of becoming an Olympian, but that did not materialise as she became pregnant three months before completing high school and lost nine scholarships offers.

When her father found out, he beat her and put her out of the house.

An attempt to secure a driver’s licence resulted in her being taken in by border patrol where she was marked for deportation, but she was spared because she was heavily pregnant.

The teen mom was then encouraged to get married to her boyfriend, who was in the US Navy, to gain rightful status in the country.

Young Gipson’s trauma started years before she even left Jamaica.

Between ages six and 12, she was repeatedly sexually abused by a relative while living with her great-grandmother in rural Jamaica.

The abuse took place while her great-grandmother was busy working on the farm and she recalled that on the first occasion, the perpetrator dragged her by her feet and then raped her.

He also threatened to kill her and the other people in the house if she spoke about it.

Gipson begged to go back to her mother’s house, but she was not comfortable there.

“She sent me to my grandmother up in Red Hills – a loving family. My grandmother was very dear to me … . I was having a very nice life there until he (abuser) found where I was. He took the opportunity to come around during the summertime when the adults were at work and I was home on holidays,” she said, adding that she peed her bed at nights due to fear.

When she confided in her older male relatives that she had been repeatedly raped, she was told to remain quiet as it would cause a rift in the family.

At 12, a case of attempted rape was reported to the police and the perpetrator was placed in police custody until the court hearing.

The pre-teen recounted that she went to the family court with her mother, who asked the judge to dismiss the case because she believed that it would cause embarrassment to the family.

It was not until in adulthood that Gipson understood that she was trafficked and her childhood trauma has resulted in post-traumatic stress disorder (PTSD).

Among the symptoms she experiences are anxiety, screaming in her sleep and seeing people over her bed.

She was triggered each time she heard the stories of victims which led her to begin therapy in October 2021.

Gipson has worked as an insurance agent for the past 20 years and raised three wonderful children, the first of whom recently became a professor at Yale University.

She is the national chair for the Human Trafficking Committee (USA) on the National Council of Negro Women.

Gipson is trying to maintain a relationship with her parents while empowering trafficked persons.

She is urging parents not to send their children overseas undocumented as they will be at risk of ending up in compromising situations.

Further, she warned students on scholarships not to overstay their time as she has come across many who are being trafficked or who are struggling.