Relatives in anguish as body of missing girl found; search continues for cousin 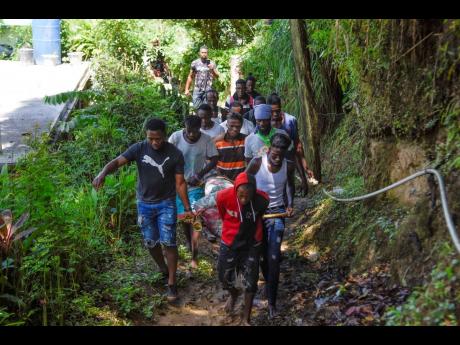 Nicholas Nunes/Photographer
Residents carry the body of 10-year-old Kiwana Ricketts in Gibbs Hill, St Mary, on Friday, after it was located a day after Kiwana and her 14-year-old cousin, Hallkeya Smickle, were washed away in a river. Hallkeya has not been found. 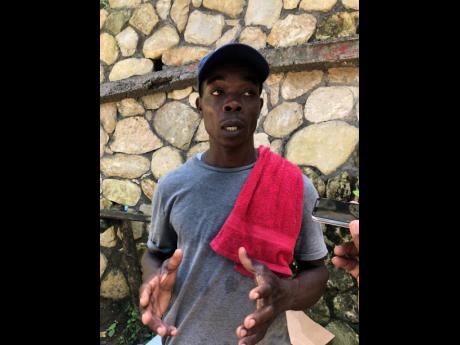 Photo by Andre Williams
Hallkeya’s father, Christopher Smickle, yesterday said he had not eaten since receiving news that his daughter was washed away in the raging river. 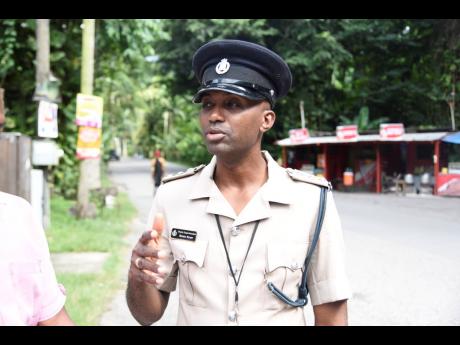 Nicholas Nunes/Photographer
Deputy Superintendent Romeo Henry of the Castleton Police Station in St Mary says the cops will keep searching for the other missing girl today.
1
2
3

A near 12-hour search yesterday for two young girls swept away by a raging river during heavy rainfall in sections of St Mary on Thursday resulted in the recovery of the body of one of the cousins as raw emotions and unbearable grief consumed...

A near 12-hour search yesterday for two young girls swept away by a raging river during heavy rainfall in sections of St Mary on Thursday resulted in the recovery of the body of one of the cousins as raw emotions and unbearable grief consumed relatives.

Eyewitnesses say Hallkeya lost her balance and fell into the river and when Kiwana tried to rescue her, they were both washed away by the current.

A frantic search-and-rescue effort was launched, but was called off when night fell.

At 5:30 a.m. on Friday, the operation to locate the missing girls resumed and Kiwana’s body was recovered.

The search for Hallkeya will resume today.

Kiwana’s mother, Yanique Taylor, was overcome with grief as she viewed the body of her 10-year-old daughter, shortly after it was fished from the still-murky waters in Gibbs Hill, miles away from where she was last seen alive.

Hallkeya’s twin sister and other family members fainted as the tragedy became all too real and had to be revived with rubbing alcohol and water.

The search party, which included members of the police force and military, was alerted to news that Hallkeya’s body had been found in Castleton, but when they made their way to the location with relatives of the child, it turned out to be a false alarm.

Hallkeya’s older sister, Lacianne Cummings, told The Gleaner that she was broken as a death in this manner was never envisioned, losing a cousin and possibly her own sibling.

“Words can’t explain, I feel very, very sad about this. When I reach, they find one and they get a next call that one in Castleton and now that we come here, nothing. Wow, it’s painful. My sister is gone,” she said.

“Biggie was jovial,” Cummings, who took the day off from work to join the search party, said of Hallkeya. “She have her own little style them. She was full of vibes. Any time you deh ‘round her, a just laughter.”

Hallkeya’s father, Christopher Smickle, told The Gleaner that he works very hard to take care of his daughters and was very upset that one of his 14-year-old twin girls remained missing.

“Mi get a call say mi daughter drown and mi say, ‘A lie’, and mi boss tell mi to go and check it out. By time mi reach a Machine, mi see a crowd of people and mi just step off the bike and head for the riverside,” he said, soaked from searching the waters.

Consumed by worry, he had not eaten since the dreadful news.

Although he is not living with them, Smickle said he and his children are very close, adding that they would often visit him at his workplace.

Hallkeya’s stepmother, who cried during the journey in search of the missing child, noted that all the children’s school supplies – including books and uniform – had been purchased recently in preparation for the start of school in just over a week’s time.

Also soaked from the waist down as he searched the murky waters, Deputy Superintendent of Police Romeo Henry told The Gleaner that the cops are committed to finding the missing girl.

“We were hoping that we would have found the body [of the second child feared dead] before the day is closed,” he said, noting that the prank call disrupted the search effort.

Henry said that the terrain was difficult and the water proved hard to manoeuvre as the flow was still heavy.

He noted that the Marine Police and the Jamaica Defence Force (JDF) were part of the effort.

“We are happy to have the JDF on board. When we reached out to them, it was a yes right away. They have been travelling the stream with us and the Marine Police are monitoring the seaside,” Henry told The Gleaner.