‘We need to clean up our act’ 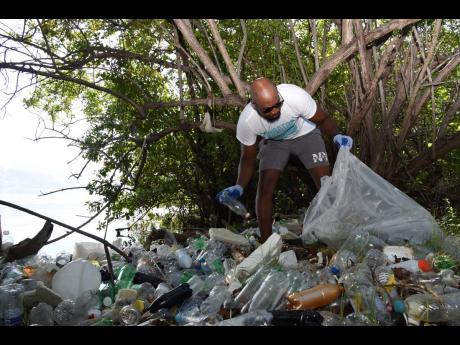 Ian Allen/Photographer
Shawn Watson of BTR Customs picks up plastic bottles along the Gun Boat Beach in Kingston on Saturday. He was among more than 200 volunteers organised by the GraceKennedy Foundation who turned out along the Palisadoes Strip for the clean-up drive ahead of International Coastal Clean-up Day on September 17. 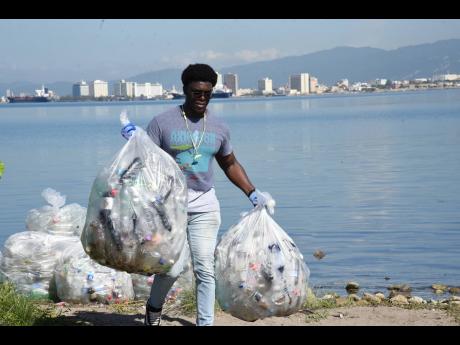 Ian Allen/Photographer
Alexander Crooks is one of the more than 200 volunteers organised by the GraceKennedy Foundation who cleaned plastic and other waste from Gun Boat Beach along the Palisadoes Strip in Kingston on Saturday. September 17 will be commemorated as International Coastal Clean-up Day.
1
2

As he cleared plastic and other waste from a Kingston beach on the weekend, GraceKennedy Foundation scholar Alexander Crooks was fuelled by inspiration and gratitude to give back to his corporate sponsors and country.

Crooks was among more than 200 volunteers who cleaned up Gun Boat Beach on the Palisadoes Strip in Kingston to mark International Coastal Cleanup (ICC) Day, which will be observed on September 17.

The 19-year-old is a second-year architecture student at the University of Technology, Jamaica.

“I was extremely excited. It’s one of the most competitive scholarships to get. I am extremely privileged and blessed to be a recipient,” the 2021 scholar said.

Crooks told The Gleaner that Kingston Harbour is one of the most polluted places in the parish, strewn with plastic bottles and other waste.

“We need to clean up our act. That’s the only way to go to have a better Jamaica and a better society,” he said.

GKF has hosted its annual beach clean-up activities at the Buccaneer Beach and Gun Boat Beach since 2016.

As a result of these efforts, GraceKennedy emerged the top corporate collector of garbage from a single ICC site in Jamaica for four consecutive years.

At its 2021 clean-up, volunteers collected over 1,900 lb of garbage from the coastline of the Gun Boat and Buccaneer beaches over a two-day period.

Eighteen-year-old Nathaniel Thomas, who recently returned from the FINA World Junior Swimming Championships in Lima, Peru, was among this year’s volunteers.

“Before I left to go to the competition in Peru, I actually planted 50 mangroves by the off-loading site which is operated and owned by the Clean Harbour Group, a subsidiary of the GraceKennedy Group. On an internship with GK, I got in contact with members of the Port Royal Marine Lab who helped me to test the site to see if it was viable for planting,” Thomas said.

The swimmer also helped to gather volunteers from Tornadoes Swim Club and students from his mother’s class to attend the beach clean-up.

Simran Rochlani and her two children were invited by Thomas, who were both eager to take part in the initiative.

“This is a great opportunity for us to come out as a group to clean up and I was just so amazed to see the amount of garbage. It was overwhelming. It will take not weeks, but maybe months to clean. Any opportunity that we get again, we will surely come out,” the mother said.

Rochlani added that she is concerned about the health of the mangroves which are inundated by bottles and plastic.

“There is a lot of work to be done. GraceKennedy is doing an amazing job getting people out and more aware of the magnitude of the problem,” she said.

Ashley Madourie said her participation in the beach clean-up was twofold - to help protect the ocean by removing litter, and to complete community service hours.

Meanwhile, Kourtnie Dixon told The Gleaner she has always been passionate about the environment and she participates in beach clean-ups whenever she can.

“Although I wasn’t the one who put the garbage here, I can contribute in removing it. I’ve seen your beach clean-ups being advertised, but I was a bit too late in signing up.

“I made sure that I signed up instantly when I saw this one,” she said, adding that she travelled from Spanish Town to get to the beach clean-up at 7 a.m.

Alaina Reid, an attorney-at-law, was invited by Dixon to participate in the cleanup.

This time was her third, travelling from St Thomas.

“I have always had a passion for the environment because as you can see, the earth is responding to bad ways in which we are treating it, so we need to do what we can do to help the earth,” Reid said.