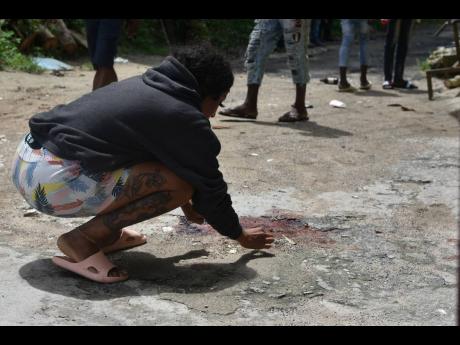 Kenyon Hemans/Photographer
A woman picks up bloodstained coins after alleged robbers of a bar in Above Rocks, St Catherine, were fatally shot by the police Tuesday morning.

The community of Creamy Corner in Above Rocks, St Catherine, which has suffered at the hands of robbers for years, rejoiced at the fatal shooting of two men who were allegedly caught red-handed during a break-in at a bar early Tuesday. Among the...

The community of Creamy Corner in Above Rocks, St Catherine, which has suffered at the hands of robbers for years, rejoiced at the fatal shooting of two men who were allegedly caught red-handed during a break-in at a bar early Tuesday.

Among the loot was a gaming box valued at hundreds of thousands of dollars – a magnet that has triggered a wave of robberies in southern Jamaica police divisions.

Residents of Creamy Corner, a rural district, report being plagued by robbers for some time and were relieved that the alleged perpetrators were stopped.

The same business place was broken into a year ago and the proprietor installed security cameras. However, the devices have been dysfunctional for some time.

“Around 10 to 15 times dem bruck inna the square. Dem take out her fridge, deh so, ya so. The last time dem come, a three box (gaming boxes) dem take out. Music box, everything,” the bar owner said in a Gleaner interview.

The alleged robbers, who reportedly engaged the police in a gunfight, were killed about 2:15 a.m.

They were pronounced dead at Linstead Hospital.

Investigators said one man was held nearby in a waiting motor vehicle while others escaped, leaving blood trails, into forested area.

A gaming box that was removed from the wall of the bar was found on the compound of the nearby St Mary’s Roman Catholic Church.

The priest, Father Francis Musyoka, was concerned that the robbers used the church property as a holding area.

Musyoka told The Gleaner that he had left the gate open Monday night because of technical issues.

It is theorised that gaming box was left at the church for pickup at a later time.

Musyoka said that he was not aware of rampant robberies in the community but revealed that the concern has never reached the steps of the church.

“I think people respect church on a whole ... but they came to hide the (stolen) properties at the church,” he said as residents gathered at the crime scene.

The residents said the dead men are not from the community.

A woman told The Gleaner that she watched as one of the alleged robbers took his last breath. She believes they were no older than 25.

“When mi hear the shot dem, mi know say a rob dem a rob … . A some petty thief dem ‘cause thief nah come and thief silver,” a resident said.

A police service vehicle was stained with blood.

The front of the premises was also littered with coins covered in blood.

Residents wasted no time after the removal of caution tape to scavenge for coins.

The bar operator preliminarily put his losses in excess of $100,000, including a shattered glass door.

A laptop was also missing from the establishment.

The gaming boxes, a prized target, are valued at approximately $400,000.

The residents openly celebrated with blaring music as they cleaned the bar, removing blood and broken glass.

“Dem a go on bad from weh day. Mi congratulate the police dem. If I did have money, I give dem $100 million. You see dem shop ya, around a hundred time dem bruck,” a resident said.

The Independent Commission of Investigations has commenced their probe in the incident.