67 schools benefit from US fundraising campaign 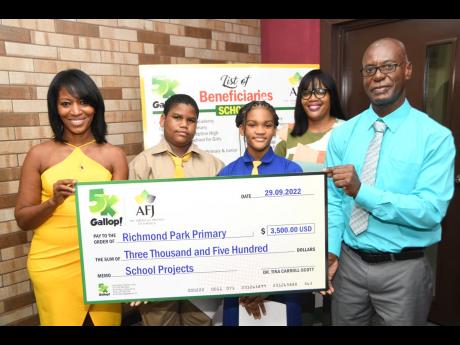 Rudolph Brown/Photographer
From left: Dr Tina Carroll-Scott (left) of 5K Gallop and on behalf of American Friends of Jamaica presents a symbolic cheque for US$3,500 to Richmond Primary School students Danir Brown and Ariel Mears; Melissa McGowan-Wright, guidance counsellor; and Principal Delwyn Gordon during a handover ceremony at the Covenant of Mercy Academy ‘Alpha’ on South Camp Road in Kingston on Friday. 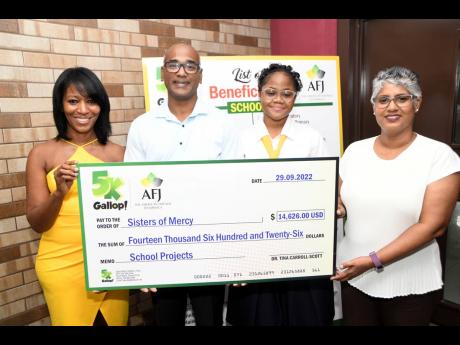 Richmond Park Primary School Principal Delwyn Gordon was a picture of gratitude on Friday as he accepted a donation of US$3,500 to assist in improving the lives of his students.

The school is among 67 institutions which received donations of varying amounts from funds raised at the inaugural 5K Gallop held in August by Dr Tina Carroll-Scott.

“This event brings hope and it comes at an opportune time when stakeholders within the education sector are renewing their calls for more support,” he said with a smile as he accepted the donation. “We will be using the money to purchase a smart board for our school and a table tennis board, so that the students can also have a recreational activity.”

Nestled in the hills of Mocho, Clarendon, Richmond Park has a capacity of 180, but the institution has only 104 students on roll as it suffered from migration caused by bauxite mining some years ago.

Despite the low population, Gordon said students have been performing well academically and have also been making strides in sports.

“Our students are so deserving of this intervention as they continue to make our school proud amid the challenging times. We are very grateful,” the principal said.

Benefactor Carroll-Scott, who has been a paediatrician for 27 years, is the medical director of South Miami Children’s Clinic in Florida, where she serves uninsured and underinsured children.

She recalled that growing up, the members of the Jamaican side of her family were very impactful in her life.

Seven years ago, her mother was diagnosed with fronto-temporal dementia and as her caregiver, Carroll-Scott has witnessed her painful cognitive decline.

She yearned to connect with her Jamaican roots and that set her on a quest to travel to the island in June 2021.

“I used the time to enjoy everything I loved about Jamaica – the food and dance – and then I started coming frequently after that, every six to eight weeks. I decided that I wanted to give back in some way. With everything that I loved about Jamaica, I could not turn a blind eye to the ills, primarily how the pandemic had affected the education of students,” she said.

Over the period, she also obtained Jamaican citizenship, a passport and a medical licence to practise in the country.

Carroll-Scott’s mother and aunt are past students of Convent of Mercy Academy ‘Apha’ and she recalled the many stories they told about Sister Bernadette and the quality education they received at the institution.

Sisters of Mercy received the largest donation, US$14,626, which will go towards the renovation of Alpha Primary School and Convent of Mercy Academy ‘Alpha’.

Development officer Charles Arumaiselvam said he was grateful for the initiative, which is “almost like a miracle” for the beneficiary schools.

“It’s not about how much money will go to individual schools, but the fact that she could pull together Jamaicans elsewhere is amazing,” Arumaiselvam said.

Meanwhile, principal of Meadowbrook High, Kevin Facey, described the US$1,000 donation his school received as a “big helping hand” and told The Gleaner that it will be placed in the institution’s welfare fund.

“We have about 250 students on PATH, 50 more that should be on PATH, and about 150 to 200 that are welfare cases,” he said, referring to the Programme of Advancement Through Health and Education – a conditional cash transfer programme which targets vulnerable households.

“We have a significant number of students who we have to serve with very limited resources. The welfare fund is not from the education ministry; it is from donations like this that we attend to the needs of our students and we are most grateful,” he explained.

In her address, Carroll-Scott shared that many people felt as though the same schools were receiving money all the time from the Jamaican diaspora.

Her fix was to place the directory of Jamaican schools on the website to allow donors the opportunity to make targeted donations towards their alma maters.

Carroll-Scott also received donations from churches and non-profit organisations and surpassed her goal of raising US$60,000.

She also partnered with the American Friends of Jamaica to facilitate the distribution of the donations to the schools.

“I want to appeal to Jamaicans all around the world that it is necessary for us to be altruistic on some level. Yes, you can support your school, but we also need to support the other schools that don’t have as many resources. It was still an incredibly successful event and I hope it will be quadrupled next year,” she remarked.