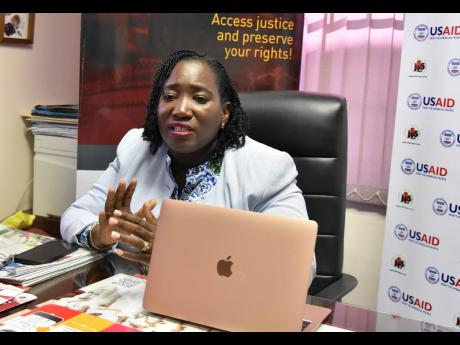 Kenyon Hemans
Kandasi Walton-Levermore“JASL turns no one away. Clients are very grateful because they tell us every day.’ 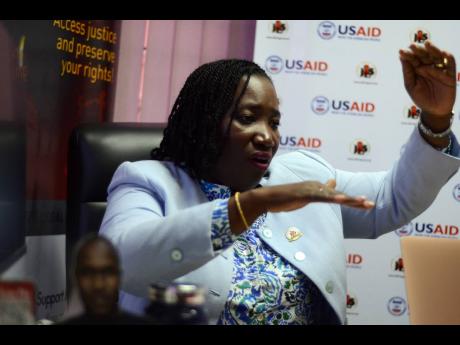 Kenyon Hemans
Kandasi Walton-Levermore“We have done much to educate the public on HIV and to get persons to understand that the stigma is unnecessary and it’s really ignorance that fuels it. But we know that it is not for the lack of education that we still have stigma and discrimination.” 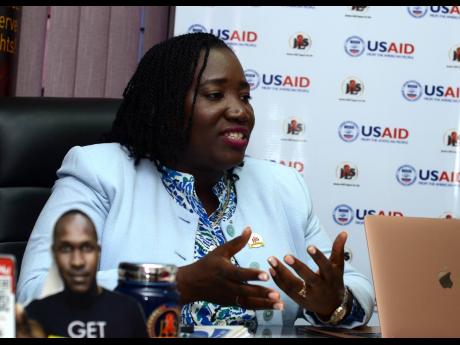 Jamaica has come a long way since the 1980s when citizens inflicted with HIV/AIDS faced rabid discrimination and stigmatisation.

In the immediate years after the first case of the disease was reported in Los Angeles in 1981, it was noted to mainly affect men who had sex with men and sex workers and was widely considered a homosexual illness until heterosexuals also started to get infected.

The unfamiliar, incurable sexually transmitted disease, with a growing death toll, caused widescale fear and panic as the AIDS epidemic spread across the globe. This fuelled dangerous levels of stigmatisation and discrimination of the homosexual community, which impacted victims of the disease accessing healthcare.

Although exhibiting symptoms, fear caused many of those afflicted to avoid healthcare facilities.

Jamaica recorded its first case in 1982.

Grave concern about the situation sparked the genesis of a support group in the island in the late 1980s, when a group of persons responded to the needs of a friend who had become infected with HIV. They feared for their friend, cognisant that if left untreated, HIV would lead to the deadly AIDS.

Soon, other victims of the dreaded disease heard about the group and sought them out.

At the time, the focus of the Government was general preventive measures and not targeted to include the most vulnerable groups, which included persons already infected with HIV, men who have sex with men and sex workers.

JAS was urged by the Ministry of Health to build on its work with those vulnerable groups, as trust had been established through the provision of a stigma-free zone in which everyone could access testing, counselling and treatment, regardless of sexual orientation, gender, race, occupation, colour, class, economic status or religion.

Today, four decades since the island’s first case, some 30,000 Jamaicans are living with the disease, and becoming virus suppressant is a celebrated achievement for many, leading to a drastic decline in the death toll.

In fact, with advances in HIV prevention, care, and treatment, it is no longer considered a death sentence, but instead a chronic disease. Persons living with HIV now have hope for a long, healthy life with on-time and consistent treatment.

This year, of the six AIDS victims who died in the country, four were murdered – all in cases unrelated to their health status.

JASL Executive Director Kandasi Walton-Levermore and her team of 75 full-time employees across the island celebrate the many achievements racked up over the years while remaining focused on the work to be done, and are always evolving as the world, too, changes.

Walton-Levermore has been associated with JASL since 2011 and she describes it as dynamic work.

“I am a social development person; that’s always my passion. I am a rural girl and I believe in development, equity, opportunity and that everyone deserves a chance,” she told The Sunday Gleaner last week in an interview.

She was speaking ahead of this week’s commemoration of World AIDS Day on December 1. Among the activities planned to mark the day is a candlelight vigil to recognise those who died from HIV/AIDS.

“I have always been driven to this type of work – development work – and JASL, in and of itself, has been so dynamic. We started off with one thing and here we are, and here I am, more than 10 years later because the work manages to keep us engaged ... and inspired. I have seen the difference we have been able to make as an organisation, and every year, we are faced with new challenges that we have to overcome.”

A problem solver, Walton-Levermore’s greatest joy is finding solutions to further their cause, which has led to JASL’s work increasing exponentially. The organisation now has a permanent home on Hendon Avenue in St Andrew, which is not only their headquarters but a location offering a wide range of services to the public.

Walton-Levermore is ever the energiser bunny, recalling that when she was interviewed for the job, she told the panel that she gets easily bored, hence, she relishes the various challenges that require her problem-solving capability.

“A lot has changed for the organisation and the work that we do. But at the same time, a lot has not changed. A significant milestone for us is the dynamics of how the organisation has been able to develop its programmes so that it is more responsive to the community it serves,” she said.

JASL is dedicated to preserving the rights and dignity of persons living with and affected by HIV/AIDS, which is reflected in the value system it incorporates in the delivery of its programmes.

The donations poured into the entity by USAID, the Global AIDS Fund, the Ministry of Health and Wellness, AIDS Healthcare Foundation and others make a world of difference in achieving its objectives.

Among the organisation’s improvements are the comprehensive suite of services it now offers. The once volunteer clinics and medics have now changed to on-time scheduled personnel, where clients are now seen with dignity and in privacy.

JASL is not just interested in clients’ HIV status, but also their lives, children, basic needs, mental health, skill level and how they can improve the services on offer.

“JASL turns no one away. Clients are very grateful because they tell us every day,” said the executive director.

Walton-Levermore is grateful that the organisation’s hard work has led to a marked decrease in stigmatisation and discrimination, but noted that there is still more to be done.

“We have done much to educate the public on HIV and to get persons to understand that the stigma is unnecessary and it’s really ignorance that fuels it. But we know that it is not for the lack of education that we still have stigma and discrimination,” she told The Sunday Gleaner.

“We believe that it is something that the policymakers, legislators need to do something about. There is no protection in law for persons who experience discrimination based on their health status, sexual orientation or occupation. HIV does not discriminate, so we should not. And there should be laws to protect persons.”

Anti-discrimination legislation, Walton-Levermore believes, will lay the foundation over time to change the culture. Therefore, she is calling for the enactment of laws to protect all vulnerable and marginalised groups.

Many persons living with HIV, she said, were unable to access initiatives such as the Programme of Advancement Through Health and Education (PATH) because of discrimination. The overseas farm work programme once required HIV testing of persons selected, which forced JASL’s legal counsel to intervene at least once.

HIV, Walton-Levermore said, has also been used as a weapon in many instances, including by landlords.

“JASL board’s dream is to move all of our wealth of knowledge of development work and apply it to other things because the efforts that the team has put into HIV, we have seen so much in society that my lovely team can use their expertise to address. So the longer we say but not do what is necessary to ensure that persons are protected and have access to the services, then the longer we are actually fuelling this epidemic,” she cautioned.

Walton-Levermore said a lot has also been achieved in the area of preventing mother-to-child transmission. In recent years, there has been a high success rate, with about three babies per year contracting the virus as birth.

Operating three facilities in Jamaica – St Andrew, St Ann and St James – and with a little under 1,000 people in its care, JASL works closely with the ministries of health and education.

They also have initiatives targeted at school-age children, as the executive director believes there needs to be a strong focus on sexual health and reproductive education among teenagers.

JAMAICA TOO SLOW TO ENACT POLICIES

Walton-Levermore is impatient with the pace of change, noting that the country is far too slow to enact critical policies.

She believes Jamaica has a social development deficit and is too tardy with social programming and preparing the younger generation to carry the country forward, a view also expressed by UNAIDS Executive Director Winifred Byanyima, who recently visited the island.

“I want us to look at some of the outcomes we have for HIV and speed up some of the processes. We are taking too long. Policymakers need to step up and make changes faster,” Walton-Levermore told The Sunday Gleaner.

“The Ministry of Health, our dearest partners, must do their in-house cleaning up. We must work harder to meet the 2030 goals of having 95 per cent of the people diagnosed on treatment and 95 per cent of them getting to viral suppression so we can see the end of AIDS as an epidemic.”

Top priorities for the next five years include expanding the work of JASL across Jamaica as well as the development of anti-discrimination legislation, advocated for by both Government and citizens.

Walton-Levermore wants the organisation to reposition itself to help deal with broader issues around health and social development, including poverty, gender, and sustainable development.

“We are proud to operate in a Jamaican society, which celebrates human diversity; preserves the rights and dignity of all; and provides services to all based on love, action and support. JASL wants to be the lead civil society partner to the Government in the national response to HIV/AIDS through rights-based programme implementation, management, monitoring and evaluation for the promotion of universal access to prevention, treatment, care and support services,” said the executive director.