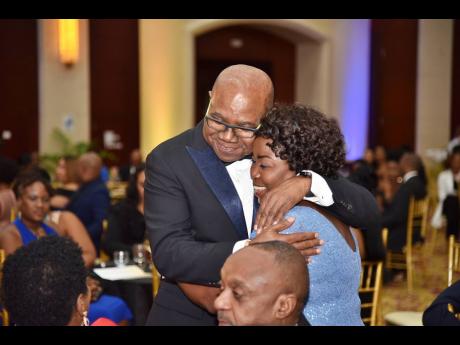 Photo by Dean Salmon
Gloria Henry gets a big hug from Minister of Tourism Edmund Bartlett after accepting the 2022 Business Leader Wall of Fame award from the Montego Bay Chamber of Commerce and Industry at the Montego Bay Convention Centre last Saturday night.

Gloria Henry was honoured Saturday for her pioneering role in the business process outsourcing (BPO) industry and her influence on the build-out of the sector in Montego Bay, Jamaica’s western city.

Henry, the Nearshore Executive of the Year and former president of the Business Process Industry Association of Jamaica (BPIAJ), became the first woman to be inducted into the prestigious Business Leaders’ Wall of Fame during the Montego Bay Chamber of Commerce and Industry’s annual banquet.

Henry, who has made significant contributions to Montego Bay’s development and has been credited, in part, for the addition of 30,000 new jobs during her five-year tenure as president of the BPIAJ, now the Global Services Association.

She has also spent a lifetime transforming lives through community service.

“I have a regular prayer that says, ‘God, please bless me with success and keep me humble.’ I give thanks for His blessings,” Henry told The Gleaner from her home in Montego Bay Sunday morning, hours after her history-making feat.

“It’s been more than a quarter-century of public service, but it feels so natural because service is deeply etched in my DNA. I give all the credit to my late mother, who taught us very early to give back, and to my late father, who taught me determination and courage,” she said.

That determination was evidenced when she worked as part of the team that won the battle for Jamaica’s first site-specific Marine Park in Montego Bay and was even more pronounced while she served the elderly and physically challenged at the Jamaica Association of Administrative Professionals very early in her career.

That journey took her to the presidency of the Montego Bay Chamber of Commerce, where she fought for community projects long before leading the organisation from 2015 to 2017.

Today, she credits her rich experience for preparing her for the global services and BPO sector, where “fierce determination, courage, and collaboration were needed to achieve certain things”.

It was Henry who conceptualised the Business Leader Wall of Fame and revealed that she had never imagined getting personal recognition.

Henry was recently promoted to vice-president in charge of special economic zones, BPO and logistics, at the Port Authority of Jamaica. She said she could not have achieved this much without current boss, Professor Gordon Shirley, and Kingsley Thomas, former president of the Development Bank of Jamaica.

“My GSAJ colleagues, the MoBay Free Zone team, my daughter Caleigh, who has been serving with me since she was a baby, and Valarie Ives, and the chamber president and board have all given me awesome support,” said Henry.

Over the last 18 years, Henry has spearheaded the transition and expansion of the Montego Bay Free Zone from a manufacturing industrial entity into an information and communications technology-focused enclave, supporting the thriving BPO industry, which employs more than 50,000 Jamaicans nationally.

In her role at the PAJ, Henry conceptualised and implemented a contemporary incubator business model for the BPO sector that has since accommodated 13 firms in Montego Bay, while supporting the transition of entities operating at Barnett Technology Park, namely, Vistaprint, OmniNearshore, and ACCT.

She was recognised with the Nearshore Americas 2022 Executive of the Year award for outstanding leadership of the Jamaican outsourcing sector during the COVID-19 pandemic and represented the global services and BPO sector on the Ministry of Finance-led committee that prepared for Jamaica’s economic recovery.