Jamaican in US Navy offering Comfort on hospital ship 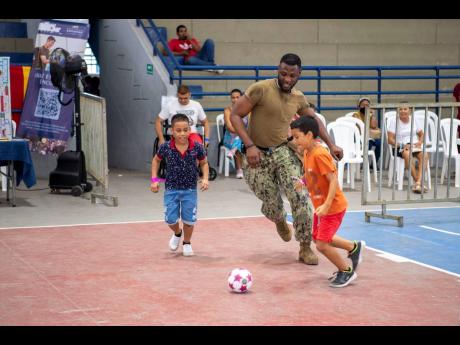 Photo by US Navy
Hospital Corpsman 3rd Class Lou-Shane Daley, from Linstead, St Catherine, play football with kids at a medical site set up in the Sports Coliseum of Combat and Gymnastics in Cartagena, Colombia, on November 15. Comfort is deployed to US 4th Fleet in support of Continuing Promise 2022, a humanitarian assistance and goodwill mission conducting direct medical care, expeditionary veterinary care, and subject matter expert exchanges with five partner nations in the Caribbean, Central and South America. 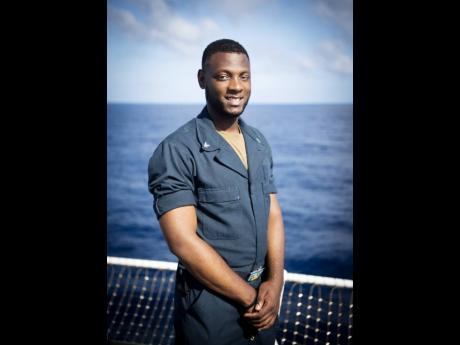 Contributed
Lou-Shane Daley: “We just threw the ball out there and they kept coming from all different locations. It was amazing for me.”
1
2

One thing that Jamaica-born Lou-Shane Daley, a third-class petty officer, has learned from enlistment in the United States Navy is the value of philanthropy, especially for the benefit of children. Daley learned about the hospital ship USNS Comfort...

One thing that Jamaica-born Lou-Shane Daley, a third-class petty officer, has learned from enlistment in the United States Navy is the value of philanthropy, especially for the benefit of children.

Daley learned about the hospital ship USNS Comfort Continuing Promise 2022 mission while serving for two years at the Naval Medical Center in Portsmouth, Virginia. This mission provides patients from across the world with limited surgical and post-surgical care aboard.

The 34-year-old quickly seized the chance to join the expedition, which was launched on October 19 and consists of approximately 1,000 military and civilian employees.

Five nations in the Caribbean, Central America, and South America – with mission stops in Colombia, the Dominican Republic, Guatemala, Haiti, and Honduras – will be treated to health services such as general surgery, ophthalmologic surgery, medical evaluation and treatment, preventive medicine, and dental screenings and treatment, among others.

The Comfort Continuing Promise mission started in 2007. More than 582,000 patients have been treated and over 7, 000 surgeries conducted in the region.

Born and raised in Linstead, St Catherine, Daley knew from an early age that he wanted to work in any position that would afford him an opportunity to care for needy individuals.

“That’s absolutely fulfilling for me. It’s something I’ve always wanted to do – touch people’s lives,” he said in a recent Gleaner interview.

After leaving Charlemont High School, he planned to enlist in the Jamaica Defence Force (JDF) but opted to go to university instead.

Daley, who received a full scholarship to study forensic chemistry in his third year at the University of Technology, Jamaica, made the pivotal decision to emigrate to the United States at the age of 25.

Though his family did not support the move, Daley has not looked back or regretted the decision.

The youngest of five siblings, he noted that things changed dramatically, with life becoming much more difficult in the United States than in Jamaica. But those hurdles, he said, made him more resilient in his career pursuits.

He was inspired to chase his dreams by his wife, Carla Angus, who has been in the military for 20 years. He said that her pride in serving her country spurred him to “be a part of something that was bigger” than himself.

Serving as a hospital corpsman on board, one of his most heart-warming encounters was interacting with a young female patient who had a blood pressure of 225/105 mmHg, representing hypertensive crisis, who began to cry after receiving the news.

Daley said that he reassured her that she was in capable hands and would be taken care of.

“I gave her just a bottle of water, and the level of gratitude that she expressed was just beyond my imagination, and it just speaks to the simple things in life that we forget that other people value so much,” he said.

During one of the mission stops in Colombia, Daley engaged in a friendly football match-up with kids. That was one of his most memorable moments.

“Just the sheer exuberance and excitement on the kids’ face. I didn’t even call a single child. We just threw the ball out there and they kept coming from all different locations. It was amazing for me,” he said.

Daley noted that sport was a fundamental tool he leveraged while working as a community development officer, helping to steer kids from antisocial behaviour.

In primary school, Daley recalled how he and his peers would stuff juice boxes to use as makeshift balls because they could not afford to purchase a real football.

He confessed that although he was not one of the best players, his passion for the sport kept alive his dream of professional football.

“I did dream a lot. However, you know, we gotta learn to separate reality from our dreams. There was definitely a desire, but I understood what my limitations are, so I chose academics,” he said jokingly.

A fan of the Brazilian football team, who face South Korea in the World Cup at 2 p.m. EST, Daley is enraptured by the South Americans’ style of play and their quality players who exhibit “phenomenal” footwork “beyond what any other team can offer in the sport”.

His childhood football hero is Ronaldinho because of his charisma and dedication.

“I think no other player is as decorative on the ball as he is,” he added.

Being in the Navy, Daley said, has taught him how to work with people from diverse backgrounds to execute a common goal.

“I think the military, for any young people out there who desire more for themselves, confused about life or just need direction, I think the military is a good start for you and will definitely get you on the right path,” he said.