Cleanliness is all about proper garbage disposal 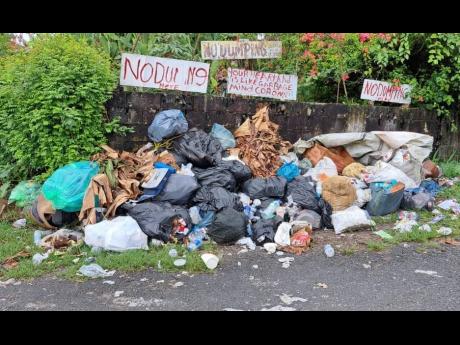 In this file photo, despite no dumping signs placed at the entrance to Ackee Lane in Bindbrook, Portland, residents continue to dump waste next to the residence of an elderly couple.

This is with reference to The Gleaner editorial of Saturday, December 3, titled ‘Clean-ups shoudn’t just be Christmas exercises’. Here, again the source of the problem is being conveniently ignored.

Everybody produces garbage. The big difference between ‘uptown’ and ‘downtown’, however, is not the frequency at which their garbage is collected, but how residents choose to dispose off their garbage. This includes when they are in public spaces.

Residents who show civic pride and are fussy about the accumulation of garbage in their neighbourhoods, they will ensure that they have clean communities because it is the way they want them to be.

There is nothing stopping inner-city and lower-income communities from doing the same; properly disposing of your garbage is not a money thing. The difference is between being nasty people or being civilised people.

Nasty people are not even aware that there is something called ‘garbage bins’...they dump and drop anything anywhere.

That is why dem community look suh.