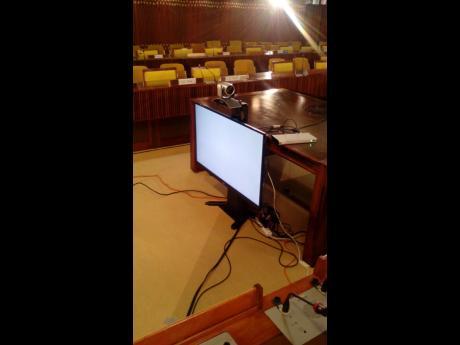 A Jamaica Defence Force (JDF) soldier today recounted how he saw two young men laying in a house with multiple gunshot wounds moments after they had a brief conversation with a group of masked policemen during the May 2010 operations in Tivoli Gardens.

The soldier identified only as Soldier One, was testifying from an undisclosed location via audio and video links before the West Kingston Commission of Enquiry.

He recounted that he was among a group of soldiers standing near the intersection of Dee Cee and Chang Avenues when a group of policemen wearing balaclava masks began conducting house to house searches.

The soldier said they went to "a particular" house 15 metres away from where he was standing and enquired who was inside.

He said he heard a woman responded by saying she was there with her two sons.

The soldier said the policemen ordered the woman out the house and told the two young men to sit.

He said he heard the police speaking to the two men and then shortly after there were explosions "that sounded like gunshots."

"Two or more [explosions] coming from the direction where I heard the talking," he testified.

The soldier said shortly after he and a colleague went to the house where he heard the explosions.

"When I went there I saw two bodies and one a them his eyes were turning over in his head. Both of them had bullet wounds," he recounted.

"Did you see any guns in the area where the boys were?" asked senior counsel to the commission, Garth McBean, who led Soldier One through his evidence.

"No," the soldier replied.

"Would you be able to identify those policemen?" McBean continued.

"No because they were wearing masks," he replied.