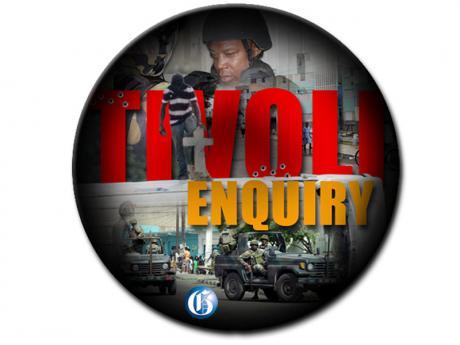 A mother of two young boys broke down in tears and sobbed uncontrollably a short while ago as she recounted how her sons were taken from her Tivoli Gardens home during the May 2010 operations and made to lay in a neighbour's garden.

Marjorie Williams told the West Kingston Commission of Enquiry that she peeped from a window in her house and saw several policemen standing over her sons, 17-year-old Denham Town High School student Fernando Grant and his 20-year-old brother Fabian Grant.

Williams said her sons were crying uncontrollably and she heard one of the policeman say to him: "Shut up boy, you going dead today".

"You actually heard him say that?" asked chairman of the commission Sir David Simmons.

Williams said she ran to her father, who is blind, and told him what she saw and that she feared the police were going to kill her sons.

At this point the woman broke down in tears and began sobbing.

"Me belly a hurt me", she sobbed before she was helped from the witness stand.

Williams testified earlier that she was home with her family on Tuesday May 25, 2010 and revealed that the constant sound of gunfire left her two sons scared.

"Fernando was nervous and said 'mommy I feel like I am going to die'," she recounted.

Williams said moments later she heard a knocking on her door and opened it to see a Jamaica Defence Force (JDF) soldier. She said when her sons came out the soldier called a group of policeman and told them to "sort them out".