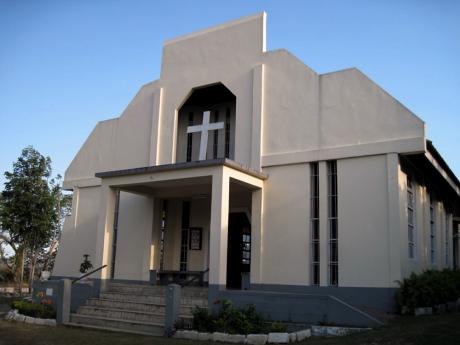 Shanique Samuels
The front entrance to the Salem United Church.

The Salem United Church in Jamaica and the Cayman Islands, known then as the Salem Congregational Church, was founded in 1838 by missionaries who came to Jamaica in 1834 seeking lands to purchase on which they would build churches. They were instructed not to stay in cities like Spanish Town and Kingston, but to concentrate on the rural areas.

As such, upon arriving in the island, two went to the north coast, two to the central end of the island, which included areas such as Mandeville, Four Paths and Denbigh, and one went to Morant Bay.

In 1835, after settling in Mandeville and Four Paths, two of these missionaries - William Slater and William Barrett - journeyed to the hills of Clarendon in search of a suitable place to establish a mission. They visited estates in Kellits, Brandon Hill, and Arthurs Seat, but received a bad reception from the planters and overseers, so much so that they concluded that the area was not suitable for the plans they had.

The planters and overseers were fearful that if a mission was started in their area, it could cause further unrest among the slaves who were already restive.

In 1837, however, they were able to purchase one acre and 34 perches of land with a dwelling house on it in Chapelton. Their instructions then were to form churches and build schools. In 1838, the first minister, Robert Jones, and his wife settled there in an old great house.

The Reverend Hyacinth Edwards has been the pastor of the Salem congregation for the last 20 years. She told Family and Religion that, so far, the church has had 20 ministers, of whom only three are Jamaican. Most of the ministers were from countries in Europe, such as Wales, Scotland, Ireland and Amsterdam.

The longest serving minister was the Reverend Alexander Eastwood, who served for 29 years and was also the first Jamaican.

"The church is governed by a board which is elected by the congregation. Presently, there are 17 elders who oversee each of the auxiliaries. These groups include the Men's Fellowship, Women's Fellowship, Youth Fellowship, Young Adults Action Movement, and the Sunday school, which are all active.

She says that each Sunday, a group takes charge of the service. "Each group is very much involved and we try keep them active."

"Over time, we have changed the liturgy to include contemporary songs and tweaked the worshipping process to include clapping and the use of different instruments in worship. Since my time, we have also established a feeding programme, where we feed six people twice per month with balanced meals and we fellowship with them," Edwards told Family and Religion. The church also offers counselling services.

Edwards says that the church is working to complete a hall that will serve the community of Chapelton. "We want to establish an environment where young people can come in and do their homework and get the additional support they might need."

One former minister, the Reverend Duncan Fletcher, got involved in the politics of the time. He became a very close friend of National Hero George William Gordon, who was invited to many tea meetings at Salem. There were many meetings held at Salem, where people were allowed to express themselves on political, social and economic concerns. George William Gordon was later hanged during the Morant Bay Rebellion.

The Salem United Church in Jamaica and the Cayman Islands will celebrate its 178th anniversary of existence later this year.